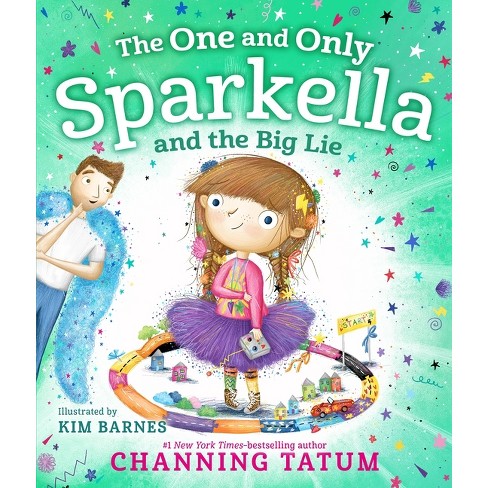 In this third picture book from leading actor, producer and director Channing Tatum, a unique little girl wants to make friends the cool new kid at school, but has to learn the importance of honesty when she borrows another friend's toy to do it.

The One and Only Sparkella and the Big Lie continues actor, producer and director Channing Tatum's Sparkella picture book series, a charming ode to self-reliance and the love between father and daughter, illustrated by Kim Barnes.

Sparkella is excited for her first playdate with the super cool new kid at school, Wyatt. But she's worried that all of her toys and games at home are too old, too homemade, or too un-cool, so she decides to borrow a shiny racecar from her best friend, Tam, without asking. When Tam is upset that her car is missing, Sparkella feels bad, but she can't seem to make herself tell the truth about taking the toy. To make things right with her friend, it'll take a little help from her dad to learn the importance of honesty and taking responsibility when you make a mistake.

Praise for The One and Only Sparkella Makes a Plan:

Praise for The One and Only Sparkella: An Instant #1 New York Times Bestseller!
A Publishers Weekly Bestseller! Hollywood superstar Tatum pens a sparkling debut. ... The endearing representation of a supportive single father makes this book shine; similarly, the illustrations delight throughout, tenderly reflecting Sparkella's struggles and successes. A charming story of self-reliance. --School Library Journal, starred review A delightful tale that encourages kids to embrace their individuality. --People For the children, or the inner child, in your life. --Oprah Daily

Channing Tatum is known for his work both on-screen as an actor and behind-the-scenes as a producer and director. In 2021, he added #1 New York Times-bestselling Author to his body of work when his first children's book, The One and Only Sparkella, debuted at the top spot. In 2014, Tatum founded his production company Free Association with partners Peter Kiernan and Reid Carolin. He and Carolin produced and co-directed Dog, in which Tatum also starred. Tatum's feature credits include the Magic Mike and Jump Street franchises; Matthew Vaughn's Kingsman: The Golden Circle; the critically-acclaimed drama Foxcatcher; the Coen Brothers' Hail, Caesar!, Quentin Tarantino's The Hateful Eight; Dear John; and The Vow. However, his favorite role to date is being father to his daughter Everly, who loves sparkly, rainbow-y things. He currently resides in Los Angeles.