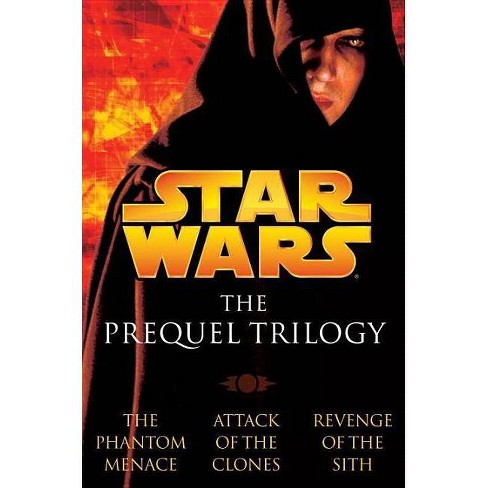 This omnibus edition contains the novelizations of the three most recent "Star Wars" films--Episode I "The Phantom Menace," Episode II "Attack of the Clones," and Episode III "Revenge of the Sith."

For the first time in one stunning volume, here is the complete, epic story arc: The Phantom Menace, Attack of the Clones, and Revenge of the Sith. Experience the sweeping tale of good and evil, of myth and magic, of innocence and power-and witness the tragic transformation of Anakin Skywalker from mere slave to one of the greatest, most powerful, and feared villains of the galaxy: Darth Vader. "The path has been placed before you, Anakin.
The choice to take it must be yours alone." On the barren desert world of Tatooine, young Anakin Skywalker toils by day and dreams by night . . . of traveling the stars to worlds he's only heard of in stories. When Jedi Knight Qui-Gon Jinn and his apprentice, Obi-Wan Kenobi, cross paths with Anakin, it marks the beginning of the drama that will become legend. Courageous to the point of recklessness, Anakin comes of age in a time of great upheaval. The attempted assassination of Senator Padmé Amidala thrusts the Republic close to the edge of disaster-and brings Anakin and Padmé into a secret romance as intense as it is forbidden. As combat escalates across the galaxy, the stage is set for an explosive endgame. Tormented by unspeakable visions, Anakin edges closer to the brink of a decision with profound ramifications. It remains only for Darth Sidious to strike the final staggering blow against the Republic-and to ordain a fearsome new Sith Lord: Darth Vader. THE PHANTOM MENACE
by Terry Brooks, based on the story and screenplay by George Lucas ATTACK OF THE CLONES
by R. A. Salvatore, from a story by George Lucas and a screenplay by George Lucas and Jonathan Hales REVENGE OF THE SITH
by Matthew Stover, based on the story and screenplay by George Lucas

Terry Brooks has thrilled readers for decades with his powers of imagination and storytelling. He is the author of more than thirty books, most of which have been New York Times bestsellers. He lives with his wife, Judine, in the Pacific Northwest. R. A. Salvatore is a fantasy author best known for The DemonWars Saga, his Forgotten Realms novels, and Vector Prime, the first novel in the Star Wars: The New Jedi Order series. He has sold more than fifteen million copies of his books in the United States alone, and more than twenty of his titles have been New York Times bestsellers. R. A. Salvatore lives with his wife, Diane, in his native state of Massachusetts. Matthew Stover is perhaps best known for his four Star Wars novels, Star Wars: The New Jedi Order: Traitor; Star Wars: Shatterpoint; Star Wars: Luke Skywalker and the Shadows of Mindor; and the novelization of the movie Star Wars Episode III Revenge of the Sith. He has also written several fantasy novels, including Iron Dawn and Jericho Moon, and four science fiction/fantasy stories featuring a hero named Caine.
If the item details above aren’t accurate or complete, we want to know about it.

5 out of 5 stars
Would recommend
MTS - 4 years ago, Verified purchaser
Love The Original Star Wars Trilogy , I Sure I’ll Love The Prequels!
Did you find this review helpful?