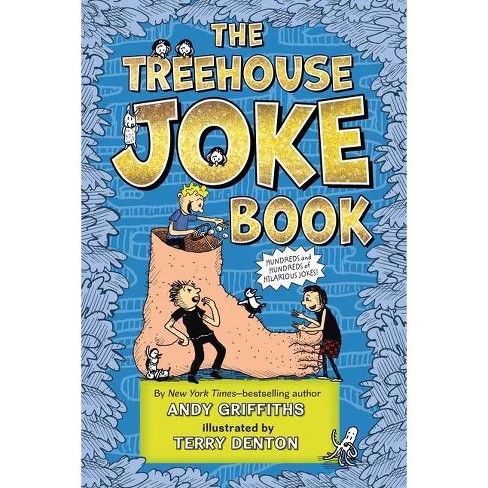 A joke book full of hundreds of laughs from the dynamic duo behind the New York Times-bestselling Treehouse chapter book series, Andy Griffiths and Terry Denton.

What's black and white and read all over the world? The New York Times-bestselling Treehouse series, of course!

International author-illustrator superstar duo Andy Griffiths and Terry Denton are back, and this time they've cooked up a hilarious joke book to complement their beloved chapter book series. Chock-full of gags, quips, and puns--both all-new and some that were previously featured in The 104-Story Treehouse--The Treehouse Joke Book promises countless laughs both for existing fans and newcomers to the Treehouse universe.

Praise for Andy Griffiths and the Treehouse series:

Will appeal to fans of Jeff Kinney and Dav Pilkey . . . The wonderfully random slapstick humor is tailor-made for reluctant readers . . . A treat for all. --Booklist on The 13-Story Treehouse Twice the treehouse, twice the fun? You bet . . . Denton's furiously scrawled line drawings milk the silly, gross-out gags for everything they're worth. Kids should be flipping pages faster than a pair of inflatable underpants can skyrocket the young heroes to safety. --Publishers Weekly, starred review, on The 26-Story Treehouse This zany sequel, as much cartoon illustration as text, is an almost nonstop adventure. --Booklist on The 26-Story Treehouse

New York Times-bestselling author Andy Griffiths, who wrote the Treehouse series, Killer Koalas From Outer Space, The Big Fat Cow That Goes Kapow, The Cat on the Mat Is Flat, and The Day My Butt Went Psycho! is at his best in these wild storytelling adventures, perfect for readers of all ages.