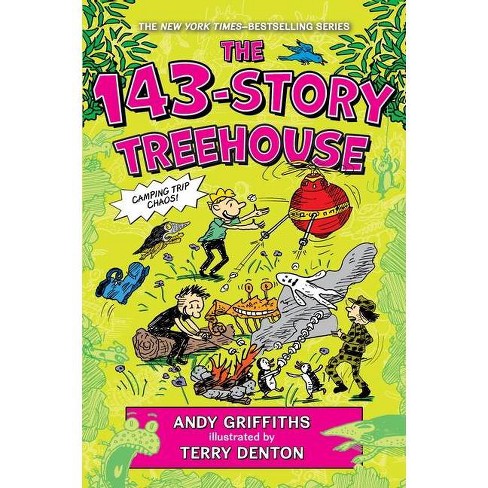 Andy and Terry live in a 143-story treehouse. (It used to be a 130-story treehouse, but they built another 13 stories.) It has a baked bean geyser that erupts on the hour every hour, a wrecking ball, a fish milkshake shack, a word-o-matic (it knows every word in the whole world!), a toffee apple orchard guarded by a kind-hearted scarecrow, and a camping ground.

Andy Griffiths and the Treehouse series:

The Treehouse books are a perfect balance of minimal text, maximum black-and-white drawings packed with jokes, and unbelievable amounts of nonstop action, gags and exuberant, anarchic storytelling. These books seem ideally designed to make a new reader feel--and be--successful. --The New York Times Anarchic absurdity at its best . . . Denton's manic cartooning captures every twist and turn in hilarious detail. --Publishers Weekly, starred review, on The 13-Story Treehouse Will appeal to fans of Jeff Kinney and Dav Pilkey . . . The wonderfully random slapstick humor is tailor-made for reluctant readers . . . A treat for all. --Booklist on The 13-Story Treehouse Twice the treehouse, twice the fun? You bet . . . Denton's furiously scrawled line drawings milk the silly, gross-out gags for everything they're worth. Kids should be flipping pages faster than a pair of inflatable underpants can skyrocket the young heroes to safety. --Publishers Weekly, starred review, on The 26-Story Treehouse This zany sequel, as much cartoon illustration as text, is an almost nonstop adventure. --Booklist on The 26-Story Treehouse

New York Times-bestselling author Andy Griffiths, who wrote the Treehouse series, Killer Koalas From Outer Space, The Big Fat Cow That Goes Kapow, The Cat on the Mat Is Flat, and The Day My Butt Went Psycho! is at his best in these wild storytelling adventures perfect for readers of all ages.