The Undefeated - by Kwame Alexander (Hardcover) 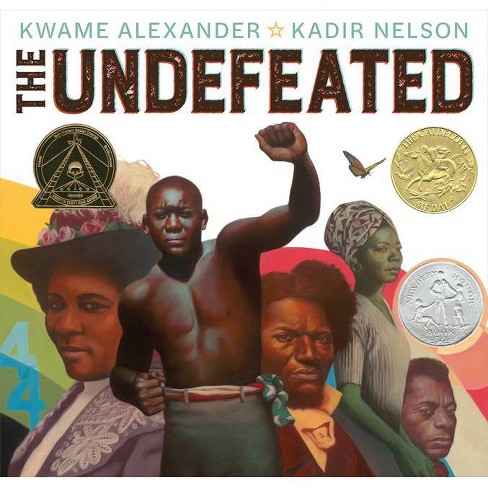 The Newbery Award-winning author of "The Crossover" pens an ode to Black American triumph and tribulation, with art from a two-time Caldecott Honoree. Full color.

Winner of the 2020 Caldecott Medal
A 2020 Newbery Honor Book
Winner of the 2020 Coretta Scott King Illustrator Award The Newbery Award-winning author of THE CROSSOVER pens an ode to black American triumph and tribulation, with art from a two-time Caldecott Honoree.
Originally performed for ESPN's The Undefeated, this poem is a love letter to black life in the United States. It highlights the unspeakable trauma of slavery, the faith and fire of the civil rights movement, and the grit, passion, and perseverance of some of the world's greatest heroes. The text is also peppered with references to the words of Martin Luther King, Jr., Langston Hughes, Gwendolyn Brooks, and others, offering deeper insights into the accomplishments of the past, while bringing stark attention to the endurance and spirit of those surviving and thriving in the present. Robust back matter at the end provides valuable historical context and additional detail for those wishing to learn more.

A Best Book of 2019 from: New York Times * NPR * Horn Book * Kirkus * Publishers Weekly * School Library Journal * New York Public Library * Chicago Public Library * Raleigh News & Observer New York Times Bestseller
National Book Award Longlist
Kirkus Prize Finalist "[A] powerful tribute to the African-American experience, replete with joy and pride in the accomplishments of individual artists and athletes, leaders, and thinkers.... Poetry knows when to lean forward and when to pull back, and in 'The Undefeated, ' Alexander has walked that line perfectly. This book will fill readers with a sense of the wealth and the cost of history."--New York Times Book Review "Dramatic oil paintings expand on a deeply personal poem to showcase 'dreamers and doers, ' united in solemn testimony: Black history matters."--San Francisco Chronicle "An empowering look at the history of black Americans."--The Takeaway "[T]his magnificent anthem to the courage and genius of black Americans has been turned into a picture book with stunning portraits by Nelson....communicating clearly that when black lives matter, America is stronger." --Publishers Weekly, STARRED review "Alexander's poetry possesses a straightforward, sophisticated, steady rhythm that, paired with Nelson's detail-oriented oil paintings, carries readers through generations...An incredible connector text for young readers eager to graduate to weighty conversations about our yesterday, our now, and our tomorrow." --Kirkus, STARRED review "A beautiful volume that encourages multiple viewings and further research...With a lengthy roster of accolades and best-seller credits between them, this untouchable duo's book will fly off the shelf." --Booklist, STARRED review "Alexander and Nelson honor the achievements, courage, and perseverance of ordinary black people as well as prominent black artists, athletes, and activists....creating a through-line from past to present." --The Horn Book, STARRED review "[A] poignant and powerful ode to the resilience and strength of black life and history in America.... Alexander and Nelson present an exceptionally moving and triumphant work. This book is an essential first purchase." --School Library Journal, STARRED review

Kwame Alexander is the New York Times Bestselling author of 25 books, including Rebound, the critically acclaimed prequel to the 2015 Newbery Medal-winning The Crossover. The recipient of the 2017 Inaugural Pat Conroy Legacy Award, Kwame lives with his family in Virginia. www.kwamealexander.com
Twitter: @kwamealexander
Instagram: @kwamealexander Kadir Nelson is a two-time Caldecott Honor recipient. Among his other awards are an NAACP Image Award, and the 2009 and 2014 Coretta Scott King Author Award. His work has appeared in The New York Times, Sports Illustrated, and The New Yorker. He lives in Los Angeles, CA. www.kadirnelson.com
Twitter: @kadirnelson
Instagram: @kadirnelson
If the item details above aren’t accurate or complete, we want to know about it. Report incorrect product info.