The Unwanted - by Don Brown (Hardcover) 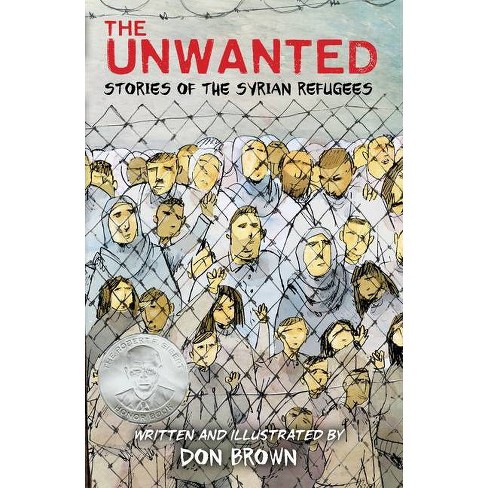 In the tradition of Don Brown's critically acclaimed, full-color nonfiction graphic novels The Great American Dust Bowl and Sibert Honor winning Drowned City, The Unwanted is an important, timely, and eye-opening exploration of the ongoing Syrian refugee crisis, exposing the harsh realities of living in, and trying to escape, a war zone.

Sibert Honor Medalist ∙ New York Public Library Best Of 2018 ∙ The Horn Book's Fanfare 2018 list ∙ Kirkus Best Books of 2018 ∙ YALSA Excellence in Nonfiction Winner In the tradition of two-time Sibert honor winner Don Brown's critically acclaimed, full-color nonfiction graphic novels The Great American Dust Bowl and Drowned City, The Unwanted is an important, timely, and eye-opening exploration of the ongoing Syrian refugee crisis, exposing the harsh realities of living in, and trying to escape, a war zone. Starting in 2011, refugees flood out of war-torn Syria in Exodus-like proportions. The surprising flood of victims overwhelms neighboring countries, and chaos follows. Resentment in host nations heightens as disruption and the cost of aid grows. By 2017, many want to turn their backs on the victims. The refugees are the unwanted.
Don Brown depicts moments of both heartbreaking horror and hope in the ongoing Syrian refugee crisis. Shining a light on the stories of the survivors, The Unwanted is a testament to the courage and resilience of the refugees and a call to action for all those who read.

"[Brown] succeeds in offering a window into the humanity of displaced groups--their resilience and tenacity but also their inspiring, hopeful nature. The pen-and-ink digitally colored art has a loose, informal style that vividly expresses the intense emotions contained in the book. A moving chronicle of a real humanitarian tragedy."--Kirkus, STARRED review "Brown provides concrete comparisons that make the problem more tangible and relatable...The varied panels perfectly control the pacing, thoughtfully guiding readers through difficult subject matter."--Horn Book Magazine, STARRED review "This accessible and heartbreaking primer, with its stirring simplicity and a note of hope, should be required reading for all teens hoping to be empathetic and engaged world citizens."--School Library Journal, STARRED review "The author of Drowned City again humanizes a story that can seem remote and incomprehensible: this time, the Syrian refugee crisis."--Publishers Weekly "An unflinching look at the Syrian refugee crisis...this is no elegy; rather, it's a call for action and acknowledgment the world over."--Booklist "Few will fail to be moved by direct quotes from the refugees as they capture readers directly with their troubled eyes: "The future is not for us. The future is for our children." --The Bulletin of the Center for Children's Books

Don Brown is the award-winning creator of many picture-book biographies and graphic novels. He has been widely praised for his resonant storytelling and delicate watercolor paintings that evoke the excitement, pain, and joy of lives lived with passion. He lives in New York with his family. Visit him at booksbybrown.com and on Instagram @donsart.
If the item details above aren’t accurate or complete, we want to know about it. Report incorrect product info.