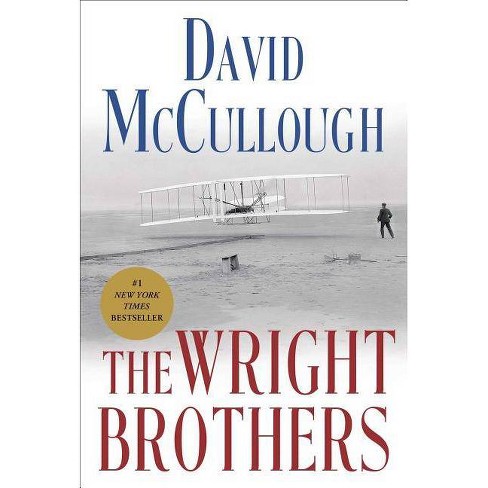 "David McCullough once again tells a dramatic story of people and technology, this time about the courageous brothers who taught the world how to fly: Wilbur and Orville Wright"--Provided by publisher.

#1 New York Times bestseller Two-time winner of the Pulitzer Prize David McCullough tells the dramatic story-behind-the-story about the courageous brothers who taught the world how to fly: Wilbur and Orville Wright. On a winter day in 1903, in the Outer Banks of North Carolina, two unknown brothers from Ohio changed history. But it would take the world some time to believe what had happened: the age of flight had begun, with the first heavier-than-air, powered machine carrying a pilot. Who were these men and how was it that they achieved what they did? David McCullough, two-time winner of the Pulitzer Prize, tells the surprising, profoundly American story of Wilbur and Orville Wright. Far more than a couple of unschooled Dayton bicycle mechanics who happened to hit on success, they were men of exceptional courage and determination, and of far-ranging intellectual interests and ceaseless curiosity, much of which they attributed to their upbringing. The house they lived in had no electricity or indoor plumbing, but there were books aplenty, supplied mainly by their preacher father, and they never stopped reading. When they worked together, no problem seemed to be insurmountable. Wilbur was unquestionably a genius. Orville had such mechanical ingenuity as few had ever seen. That they had no more than a public high school education, little money and no contacts in high places, never stopped them in their "mission" to take to the air. Nothing did, not even the self-evident reality that every time they took off in one of their contrivances, they risked being killed. In this thrilling book, master historian David McCullough draws on the immense riches of the Wright Papers, including private diaries, notebooks, scrapbooks, and more than a thousand letters from private family correspondence to tell the human side of the Wright Brothers' story, including the little-known contributions of their sister, Katharine, without whom things might well have gone differently for them.

"[An] enjoyable, fast-paced tale. . . . A fun, fast ride."-- "The Economist" "David McCullough's The Wright Brothers is a story about two brothers and one incredible moment in American history. But it's also a story that resonates with anyone who believes deeply in the power of technology to change lives - and the resistance some have to new innovations."--Sundar Pichai, CEO of Google [A] fluently rendered, skillfully focused study. . . . An educational and inspiring biography of seminal American innovators.-- "Kirkus Reviews" An outstanding saga of the lives of two men who left such a giant footprint on our modern age.-- "Booklist (starred review)" McCullough's usual warm, evocative prose makes for an absorbing narrative; he conveys both the drama of the birth of flight and the homespun genius of America's golden age of innovation.-- "Publishers Weekly" "[McCullough] takes the Wrights' story aloft. . . . Concise, exciting, and fact-packed. . . . Mr. McCullough presents all this with dignified panache, and with detail so granular you may wonder how it was all collected."--Janet Maslin "The New York Times" "A master storyteller. . . . The brothers' story unfolds and develops with grace and insight in a style at which McCullough is simply the best."--David Henricks "The San Antonio Express-News" "A story of timeless importance, told with uncommon empathy and fluency. . . . A story, well told, about what might be the most astonishing feat mankind has ever accomplished. . . . The Wright Brothers soars."--Daniel Okrent "The New York Times Book Review" "David McCullough has etched a brisk, admiring portrait of the modest, hardworking Ohioans who designed an airplane in their bicycle shop and solved the mystery of flight on the sands of Kitty Hawk, N.C. He captures the marvel of what the Wrights accomplished and, just as important, the wonder felt by their contemporaries. . . . Mr. McCullough is in his element writing about seemingly ordinary folk steeped in the cardinal American virtues--self-reliance and can-do resourcefulness."--Roger Lowenstein "The Wall Street Journal" "Few historians have captured the essence of America -- its rise from an agrarian nation to the world's dominant power -- like David McCullough. . . . McCullough has defined American icons and revealed new dimensions to stories that long seemed exhausted. . . . An elegant, sweeping look at the two Americans who went where no others had gone before and whose work helped create a national excellence in aviation that continues today.--Ray Locker "USA Today" "The nitty-gritty of exactly how [the Wrights] succeeded is told in fascinating detail."--Buzzy Jackson "The Boston Globe" "We all know what they did and where they did it -- Kitty Hawk, on the Outer Banks of North Carolina. But McCullough digs deeply to find out how they did it, and why they did it, and what happened to them in the years that followed."--Harry Levins "The St. Louis Post-Dispatch" A compelling, upbeat story that underscores the importance of industriousness, creative intelligence and indomitable patience."--Doug Childers "Richmond Times-Dispatch" McCullough vividly re-creates the failures and disappointments as the Wright brothers puzzle out the scienceof bird- and insect-wing design. . . . [McCullough] continues to deliverhigh-quality material with familiar facility and grace.--Larry Lebowitz "The Miami Herald" McCullough's magical account of [the Wright Brothers'] early adventures -- enhanced by volumes of family correspondence, written records, and his own deep understanding of the country and the era -- shows as never before how two Ohio boys from a remarkable family taught the world to fly.--Reeve Lindbergh "The Washington Post" Pleasurable to read. . . . McCullough has a gift for finding the best in his subjects without losing perspective on their flaws.--Margaret Quamme "The Columbus Dispatch"
If the item details above aren’t accurate or complete, we want to know about it.

The Dayton Flight Factory: The Wright Brothers & the Birth of Aviation - by Timothy R Gaffney (Paperback)

The Wright Brothers - by Russell Freedman