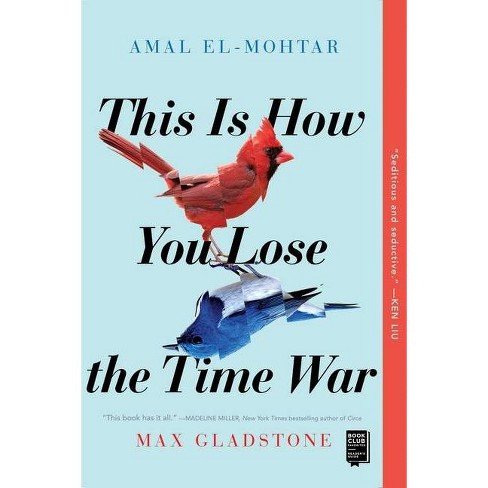 HUGO AWARD WINNER: BEST NOVELLA NEBULA AND LOCUS AWARDS WINNER: BEST NOVELLA "[An] exquisitely crafted tale...Part epistolary romance, part mind-blowing science fiction adventure, this dazzling story unfolds bit by bit, revealing layers of meaning as it plays with cause and effect, wildly imaginative technologies, and increasingly intricate wordplay...This short novel warrants multiple readings to fully unlock its complexities." --Publishers Weekly (starred review). From award-winning authors Amal El-Mohtar and Max Gladstone comes an enthralling, romantic novel spanning time and space about two time-traveling rivals who fall in love and must change the past to ensure their future. Among the ashes of a dying world, an agent of the Commandment finds a letter. It reads: Burn before reading. Thus begins an unlikely correspondence between two rival agents hellbent on securing the best possible future for their warring factions. Now, what began as a taunt, a battlefield boast, becomes something more. Something epic. Something romantic. Something that could change the past and the future. Except the discovery of their bond would mean the death of each of them. There's still a war going on, after all. And someone has to win. That's how war works, right? Cowritten by two beloved and award-winning sci-fi writers, This Is How You Lose the Time War is an epic love story spanning time and space.

"Seditious and seductive, lush and lustrous, allusive and elusive, THIS IS HOW YOU LOSE THE TIME WAR is one of those rare stories where one struggles to decide whether to heap more praise upon its clever structure and prose or its brilliant ideas and characters."
--Ken Liu, author of The Grace of Kings and The Paper Menagerie and Other Stories

"This Is How You Lose the Time War is rich and strange, a romantic tour through all of time and the multiverse, and you shouldn't miss a moment."--Martha Wells, Hugo Award-winning author of The Murderbot Diaries

"A time travel adventure that has as much humanity, grace, and love as it has temporal shenanigans, rewriting history, and temporal agents fighting to the death. Two days from now, you've already devoured it."--Ryan North, New York Times Bestselling and Eisner Award winning author of How To Invent Everything: A Survival Guide For The Stranded Time Traveler

"If Iain M. Banks and Gerard Manley Hopkins had ever been able to collaborate on a science fiction project, well, it wouldn't be half as much fun as this novella. There is all the pleasure of a long series, and all the details of a much larger world, presented in miniature here."--Kelly Link

"Poetry, disguised as genre fiction. I read several sections out loud -- this is prose that wants to be more than read. It wants to be heard and tasted."--Kelly Sue DeConnick, author of Captain Marvel

"This book has it all: treachery and love, lyricism and gritty action, existential crisis and space-opera scope, not to mention time traveling superagents. Gladstone's and El-Mohtar's debut collaboration is a fireworks display from two very talented storytellers."--Madeline Miller, Winner of the Orange Prize for Fiction

Tenderness, danger, daring, wit -- Time War has them all... In other words, these pages are strewn with myriad delights.--Nisi Shawl

Amal El-Mohtar is an award-winning author, editor, and critic. Her short story "Seasons of Glass and Iron" won the Hugo, Nebula, and Locus awards and was a finalist for the World Fantasy, Sturgeon, Aurora, and Eugie Foster awards. She is the author of The Honey Month, a collection of poetry and prose written to the taste of twenty-eight different kinds of honey, and contributes criticism to NPR Books and The New York Times. Her fiction has most recently appeared on Tor.com and Uncanny Magazine, and in anthologies such as The Djinn Falls in Love & Other Stories and The Starlit Wood: New Fairy Tales. She is presently pursuing a PhD at Carleton University and teaches creative writing at the University of Ottawa. She can be found online at @Tithenai. Max Gladstone is the author of the Hugo-nominated Craft Sequence, which Patrick Rothfuss called "stupefyingly good." The sixth book, Ruin of Angels, was released this September. Max's interactive mobile game Choice of the Deathless was nominated for the XYZZY Award, and his critically acclaimed short fiction has appeared on Tor.com and in Uncanny Magazine, and in anthologies such as XO Orpheus: Fifty New Myths and The Starlit Wood: New Fairy Tales. John Crowley described Max as "a true star of twenty first century fantasy." Max has sung in Carnegie Hall and was once thrown from a horse in Mongolia.
If the item details above aren’t accurate or complete, we want to know about it.

The Guncle - by Steven Rowley