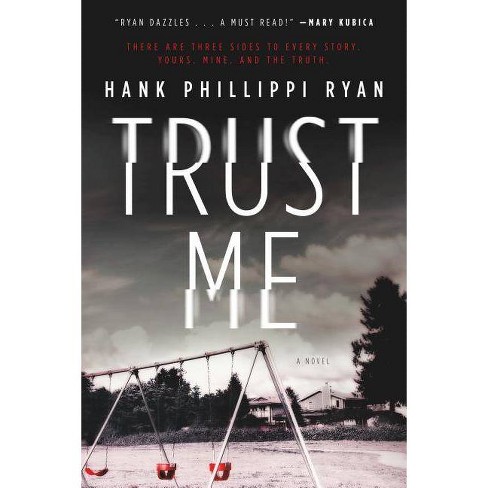 Trust Me is the chilling novel of psychological suspense and manipulation that award-winning author and renowned investigative reporter Hank Phillippi Ryan was born to write.

There are three sides to every story. Yours. Mine. And the truth.

An accused killer insists she's innocent of a heinous murder.
A grieving journalist surfaces from the wreckage of her shattered life.
Their unlikely alliance leads to a dangerous cat and mouse game that will leave you breathless.
Who can you trust when you can't trust yourself?

"Stellar...'Trust Me' when I say that her latest is her best novel to date."--Associated Press

"Mesmerizing! Hank Phillippi Ryan has outdone herself in this taut thriller of damaged lives, uneasy alliances and deadly cat and mouse. Who can you trust indeed? It will take you till the final page to figure out!"-- Lisa Gardner

"The tension mounts at a blistering pace, while Ryan dazzles on the page, weaving a sinister story that readers won't be able to put down. A must read!"--Mary Kubica

"A riveting story of guilt and deception, Trust Me is a tense and twisting psychological thriller that explores the shifting perception of the truth. Chilling, suspenseful, and impossible to put down."--Megan Miranda

"I couldn't put it down! Undeniably, Hank Phillippi Ryan's best yet! I can't wait to put it into my customer's hands."--Joanne Berg, owner of Mystery to Me

"Timely, suspenseful, well crafted...this novel is impossible to put down. This is a wonderful novel, the best combination of thoughtful storytelling and unforgettable characters. I could not stop thinking about it."--Robin Agnew, owner of Aunt Agatha's

HANK PHILLIPPI RYAN is the investigative reporter for Boston's NBC affiliate, and has won thirty-two Emmys and ten Edward R. Murrow Awards. A Boston Globe bestselling author, Ryan has won two Agatha Awards, in addition to the Anthony, Macavity, Daphne du Maurier, and Mary Higgins Clark Award. She is on the national board of directors of Mystery Writers of America and Sisters in Crime and is the author of The Other Woman, The Wrong Girl, Truth Be Told, Say No More, and What You See.
If the item details above aren’t accurate or complete, we want to know about it. Report incorrect product info.