When the Apricots Bloom - by Gina Wilkinson (Paperback) 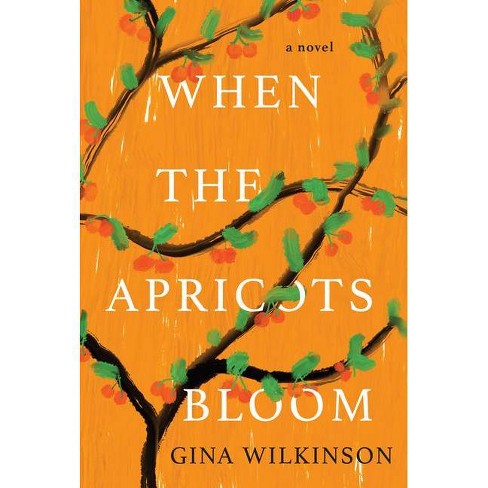 
In this moving, suspenseful debut novel, three courageous women confront the complexities of trust, friendship, motherhood, and betrayal under the rule of a ruthless dictator and his brutal secret police. Former foreign correspondent Gina Wilkinson draws on her own experiences to take readers inside a haunting story of Iraq at the turn of the millennium and the impossible choices faced by families under a deadly regime.

At night, in Huda's fragrant garden, a breeze sweeps in from the desert encircling Baghdad, rustling the leaves of her apricot trees and carrying warning of visitors at her gate. Huda, a secretary at the Australian embassy, lives in fear of the mukhabarat--the secret police who watch and listen for any scrap of information that can be used against America and its allies. They have ordered her to befriend Ally Wilson, the deputy ambassador's wife. Huda has no wish to be an informant, but fears for her teenaged son, who may be forced to join a deadly militia. Nor does she know that Ally has dangerous secrets of her own. Huda's former friend, Rania, enjoyed a privileged upbringing as the daughter of a sheikh. Now her family's wealth is gone, and Rania too is battling to keep her child safe and a roof over their heads. As the women's lives intersect, their hidden pasts spill into the present. Facing possible betrayal at every turn, all three must trust in a fragile, newfound loyalty, even as they discover how much they are willing to sacrifice to protect their families. "Vivid...secrets and lies mingle as easily as the scent of apricot blossoms and nargilah smoke. Wilkinson weaves in the miasma of fear and distrust that characterized Hussein's regime with convincing detail. Richly drawn characters and high-stakes plot." --Publishers Weekly

Praise for Gina Wilkinson and When The Apricots Bloom "A deeply involving and important novel by a master storyteller. Gina Wilkinson highlights the humanity at the center of a brutal conflict. She brings her lived experience to every page of this harrowing, dramatic, and ultimately hopeful book."
--Susan Wiggs, # 1 New York Times bestselling author "Gina Wilkinson's breathtaking novel explores the plight of ordinary people who must flee their country to survive, as three women living under the tyrannical regime of Saddam Hussein and his brutal secret police risk their lives to protect themselves and their children. Riveting and profound! I adored this book!"
--Ellen Marie Wiseman, New York Times bestselling author of The Orphan Collector "Huda, Rania, and Ally provide a glimpse into the world of Iraq during the reign of Saddam Hussein. Their lives are so different, and yet common bonds create a friendship that withstands the distrust and paranoia that pervades the dictator's rule. It is hard to imagine how hard life must have been, although Wilkinson does a marvelous job depicting the fear that all of these characters experienced. Her personal experience in Iraq during in the years prior to the Iraq war adds genuine depth to this story and the characters' lives. Reading this story gave me an appreciation for my life in a free country! It was riveting from beginning to end. I loved the characters and their strength and perseverance. A great read!"
--Stephanie Crowe, Page & Palette (Fairhope, AL) "Wilkinson's atmospheric and suspenseful novel explores the complicated relationships between two Iraqi women and a diplomat's wife during Saddam Hussein's tyrannical rule. It powerfully illustrates the peril women faced under his misogynistic, autocratic regime, and the risks, lies and betrayals they had to commit in order to protect their families. I read this novel with my heart in my throat."
--Lisa Johnson, Penguin Bookshop (Sewickley, PA) "It is so easy to forget that there are families behind the headlines, and women desperately clinging to them, willing to risk everything to protect what they hold dear. The stories of these three women are each compelling on their own, but when intertwined they become formidable. The sights and smells of Iraq are so vivid, casting hope where there seems to be only despair. This stunning novel has such an authentic voice it is easy to forget that it is a novel rather than a memoir or history."
--Jennifer Winberry, Hunterdon County Library (Flemington, NJ) "Reading this novel, I felt the warmth of the sun and tasted the sweetness of the lime tea. The intricately woven relationship between these characters and the expert pacing had me at the edge of my seat, turning the pages as fast as possible all the while wanting to savor every sentence, and even going back to reread a particularly beautiful passage."
--Kaitlin Smith, Copperfield's Books (Healdsburg, CA) "Wilkinson's chilling story about three women living under Saddam Hussein's brutal and oppressive regime draws from the time she spent in Iraq. Her distinctive perspective is especially compelling when she contrasts the lives of the two Iraqi women - estranged friends Huda and Rania - with that of Ally, the Australian diplomat's wife who unwittingly brings them together...through their bravery and determination all three women are able to write new endings for their stories."
--Margo Grimm Eule, East City Bookshop (Washington, DC) "Marvelous...mesmerizing. It was a book I couldn't put down. It has stayed with me. All I can say is 'WOW - read it. You won't be disappointed.'"
--Virginia Holsten, Vinton Public Library (Vinton, IA) "When the Apricots Bloom is an extraordinary novel, that is both poignant and hopeful. Friendship, family, trust and betrayal all factor into the lives of three remarkable women in Baghdad, under the suffocating reign of Saddam Hussein and his secret police. This powerful saga will have your heart racing, as these women risk everything for their children's freedom."
--Maxwell Gregory, Lake Forest Book Store (Lake Forest, IL)

Gina Wilkinson is an award-winning journalist, author, former foreign correspondent, and documentary maker who's reported from some of the world's most intriguing and perilous places for the BBC, NPR, ABC, and other renowned public broadcasters. During two decades living and working in hotspots across the globe, she spent more than a year in Baghdad under Saddam Hussein. At that time, Iraq was virtually sealed off from the outside world, and Gina lived under tight surveillance. One of her closest Iraqi friends even worked as a secret police informant, reporting on her every move. Gina now works in international development, supporting efforts to end poverty in the developing world. She lives in Australia and can be found online at GinaWilkinson.net.
If the item details above aren’t accurate or complete, we want to know about it. Report incorrect product info.