You Should See Me in a Crown - by Leah Johnson 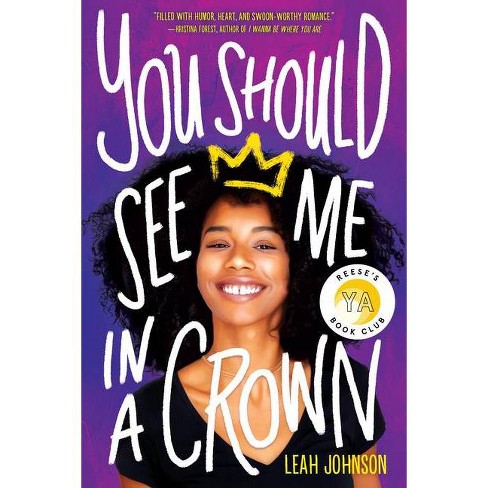 Liz Lighty has always done her best to avoid the spotlight in her small, wealthy, and prom-obsessed midwestern high school, after all, her family is black and rather poor, especially since her mother died; instead she has concentrated on her grades and her musical ability in the hopes that it will win her a scholarship to elite Pennington College and their famous orchestra where she plans to study medicine--but when that scholarship falls through she is forced to turn to her school's scholarship for prom king and queen, which plunges her into the gauntlet of social media which she hates and leads her to discoveries about her own identity and the value of true friendships.

A Reese's Book Club YA Pick!

Liz Lighty has always believed she's too black, too poor, too awkward to shine in her small, rich, prom-obsessed midwestern town. But it's okay -- Liz has a plan that will get her out of Campbell, Indiana, forever: attend the uber-elite Pennington College, play in their world-famous orchestra, and become a doctor.But when the financial aid she was counting on unexpectedly falls through, Liz's plans come crashing down . . . until she's reminded of her school's scholarship for prom king and queen. There's nothing Liz wants to do less than endure a gauntlet of social media trolls, catty competitors, and humiliating public events, but despite her devastating fear of the spotlight she's willing to do whatever it takes to get to Pennington.The only thing that makes it halfway bearable is the new girl in school, Mack. She's smart, funny, and just as much of an outsider as Liz. But Mack is also in the running for queen. Will falling for the competition keep Liz from her dreams . . . or make them come true?

Praise for You Should See Me in a Crown:

A Reese's Book Club YA Pick

Johnson's pacing is perfect as the story unwinds at dizzying speed...Readers will fall in love with this refreshing book that celebrates the beauty of individuality. -- School Library Journal

Johnson puts a fresh spin on this novel with an unlikely romance, heartwarming friendships, and the tension of being Black, poor, and queer in a small town. A feel-good title for sure. -- Booklist

Filled with humor, heart, and swoon-worthy romance. -Kristina Forest, author of I Wanna Be Where You Are

A love story worthy of a crown. -Mason Deaver, author of I Wish You All the Best

With characters I adore and a romance that brought tears to my eyes, You Should See Me in a Crown absolutely stole my heart. -Kacen Callender, author of This Is Kind of an Epic Love Story and Felix Ever After

You know when a book is like the ideal friend? You Should See Me in a Crown is that kind of book. Juicy, sharp, romantic, big-hearted, real. I loved it. -Anna Godbersen, author of the New York Times bestselling Luxe series

You Should See Me in a Crown is a powerful, absolutely relatable story that reminds Black, queer girls they have the power to do anything they want. -Camryn Garrett, author of Full Disclosure

With a refreshing voice and an unforgettable main character, Leah Johnson has written a stunning debut. Liz Lighty is smart and hilarious. -Sabina Khan, author of The Love and Lies of Rukhsana Ali

Leah Johnson is a writer, editor and eternal Midwesterner, currently moonlighting as a New Yorker. She is a graduate of Indiana University and Sarah Lawrence College, where she received her MFA in fiction writing, and currently teaches in their undergraduate writing program. When she's not writing, you can usually find her on Twitter, ranting about pop culture and politics. You Should See Me in a Crown is her first novel.
If the item details above aren’t accurate or complete, we want to know about it. Report incorrect product info.