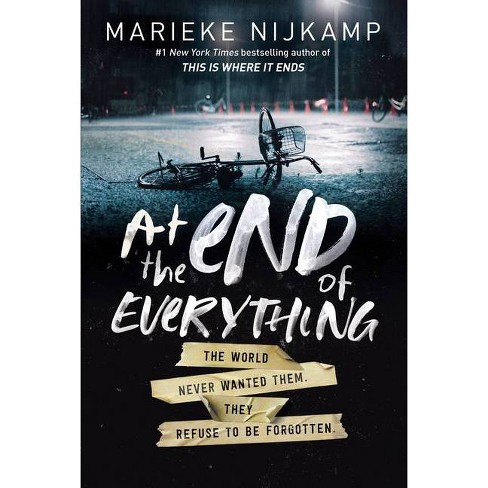 From the #1 New York Times bestselling author of This Is Where It Ends comes another heartbreaking, emotional and timely page-turner that will keep you on the edge of your seat.

The Hope Juvenile Treatment Center is ironically named. No one has hope for the delinquent teenagers who have been exiled there; the world barely acknowledges that they exist.

Then the guards at Hope start acting strange. And one day...they don't show up. But when the teens band together to make a break from the facility, they encounter soldiers outside the gates. There's a rapidly spreading infectious disease outside, and no one can leave their houses or travel without a permit. Which means that they're stuck at Hope. And this time, no one is watching out for them at all.

As supplies quickly dwindle and a deadly plague tears through their ranks, the group has to decide whom among them they can trust and figure out how they can survive in a world that has never wanted them in the first place.

Also by Marieke Nijkamp:
This Is Where It Ends
Even If We Break
Before I Let Go

Praise for Marieke Nijkamp:
Immersive and captivating. Thrilling in every sense of the word.--Karen M. McManus, #1 New York Times bestselling author of One of Us is Lying on Even If We Break
With exceptional handling of everything from mental illness to guilt and a riveting, magic realist narrative, this well wrought, haunting novel will stick with readers long after the final page.--Booklist on Before I Let Go *STARRED REVIEW*
A compelling, brutal story of an unfortunately all-too familiar situation: a school shooting. Nijkamp portrays the events thoughtfully, recounting fifty-four intense minutes of bravery, love, and loss.--BookRiot on This Is Where It Ends

At the End of Everything is a beautifully rendered, propulsive survival story that speaks to how quickly and irrevocably the world can change--and who those in power choose to leave behind. Taut and tense and truly moving, this gripped me from the opening shocks to the last perfect words. - Nova Ren Suma, bestselling author of The Walls Around Us

Thrilling, raw, and unforgettable. A story about humanity, resilience, and hope. I couldn't put this book down. The story felt so real! Nijkamp at their best! - Kami Garcia, #1 New York Times bestselling coauthor of Beautiful Creatures

Nobody Knows But You - by Anica Mrose Rissi

Even If We Break - by Marieke Nijkamp (Paperback)

Goosebumps: Secrets of the Swamp - by Marieke Nijkamp (Paperback)