Beyond Order - by Jordan B Peterson (Hardcover) 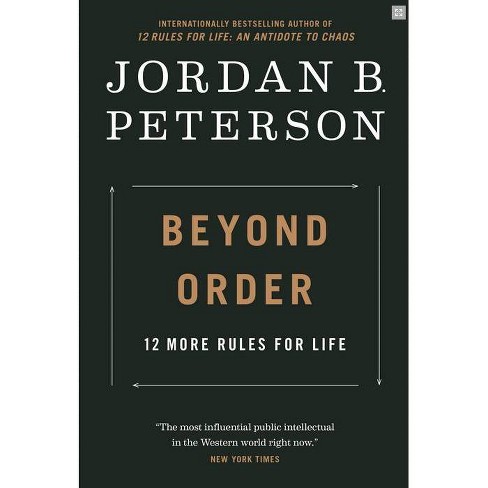 "As a follow-up to 12 Rules for Life, the author provides twelve additional rules related to the overarching theme of how the dangers of too much security and control might be profitably avoided"--

The companion volume to 12 Rules for Life offers further guidance on the perilous path of modern life. In 12 Rules for Life, clinical psychologist and celebrated professor at Harvard and the University of Toronto Dr. Jordan B. Peterson helped millions of readers impose order on the chaos of their lives. Now, in this bold sequel, Peterson delivers twelve more lifesaving principles for resisting the exhausting toll that our desire to order the world inevitably takes. In a time when the human will increasingly imposes itself over every sphere of life--from our social structures to our emotional states--Peterson warns that too much security is dangerous. What's more, he offers strategies for overcoming the cultural, scientific, and psychological forces causing us to tend toward tyranny, and teaches us how to rely instead on our instinct to find meaning and purpose, even--and especially--when we find ourselves powerless. While chaos, in excess, threatens us with instability and anxiety, unchecked order can petrify us into submission. Beyond Order provides a call to balance these two fundamental principles of reality itself, and guides us along the straight and narrow path that divides them.

PRAISE FOR JORDAN PETERSON "We live in a time when so many young (and not so young) people feel lost . . . Mr. Peterson talks about the attitudes that will help find the path. It is not a politically correct or officially approved path, but it is an intensely practical and yet heightened one: This life you're living has meaning."
--PEGGY NOONAN, Wall Street Journal

"Jordan Peterson is universally revered--and feared--for his incredible intellect and emotional insight."
--DAVE RUBIN, host of The Rubin Report and author of Don't Burn This Book "The Peterson way is a harsh way, but it is an idealistic way--and for millions of young men, it turns out to be the perfect antidote to the cocktail of coddling and accusation in which they are raised."
--DAVID BROOKS, New York Times "The world needs Jordan Peterson."
--DOUGLAS MURRAY, author of The Madness of Crowds

Dr. Jordan B Peterson is the bestselling author of 12 Rules for Life, which has sold more than five million copies worldwide. After working for decades as a clinical psychologist and a professor at Harvard and the University of Toronto, Peterson has become one of the world's most influential public intellectuals. His YouTube videos and podcasts have gathered a worldwide audience of hundreds of millions, and his global book tour reached more than 250,000 people in major cities across the globe. With his students and colleagues, he has published more than one hundred scientific papers, and his 1999 book Maps of Meaning revolutionized the psychology of religion. He lives in Toronto, Ontario with his family.
If the item details above aren’t accurate or complete, we want to know about it. Report incorrect product info.