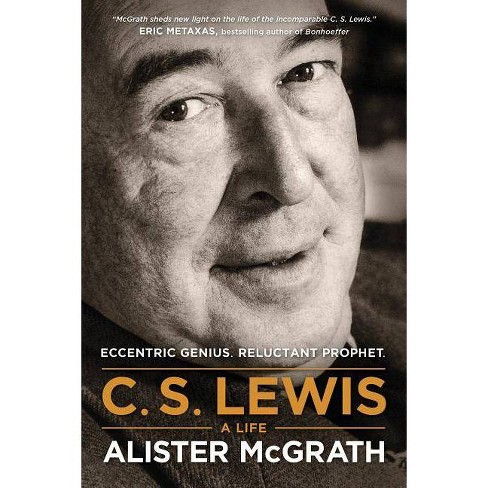 Fifty years after his death, C.S. Lewis continues to inspire and fascinate millions. He was a towering intellectual figure, a popular fiction author, and an atheist-turned-Christian thinker. McGrath paints a definitive portrait of the life of C.S. Lewis.

ECPA 2014 Christian Book Award Winner (Non-Fiction)!
Fifty years after his death, C. S. Lewis continues to inspire and fascinate millions. His legacy remains varied and vast. He was a towering intellectual figure, a popular fiction author who inspired a global movie franchise around the world of Narnia, and an atheist-turned-Christian thinker.

In C.S. Lewis--A Life, Alister McGrath, prolific author and respected professor at King's College of London, paints a definitive portrait of the life of C. S. Lewis. After thoroughly examining recently published Lewis correspondence, Alister challenges some of the previously held beliefs about the exact timing of Lewis's shift from atheism to theism and then to Christianity. He paints a portrait of an eccentric thinker who became an inspiring, though reluctant, prophet for our times.

You won't want to miss this fascinating portrait of a creative genius who inspired generations.

In honor of the 50th anniversary of C. S. Lewis's death, the celebrated Oxford don Dr. Alister McGrath presents us with a compelling and definitive portrait of the life of C. S. Lewis, the author of the well-known Narnia series. For more than half a century, C. S. Lewis's Narnia series has captured the imaginations of millions. In "C. S. Lewis--A Life," Dr. Alister McGrath recounts the unlikely path of this Oxford don, who spent his days teaching English literature to the brightest students in the world and his spare time writing a bestselling fantasy series for children. Dr. McGrath uses his extensive research and thorough examination in chronological order of Lewis's correspondence and archival materials to present a new picture of Lewis's life. This definitive biography paints a portrait of an eccentric thinker who became a compelling, though reluctant, prophet for our times. You won't want to miss this fascinating portrayal of a creative genius who inspired generations. Alister McGrath is Professor of Theology, Ministry, and Education at King's College London and head of its Center for Theology, Religion and Culture. Before moving to King's College, he was Professor of Historical Theology at Oxford University and is currently Senior Research Fellow at Harris Manchester College at Oxford. Dr. McGrath is a bestselling author of more than 50 books and a popular speaker, traveling the world every year to speak at various conferences.

Alister McGrath's "C. S. Lewis: A Life" now supplies a welcome balance, along with some significant discoveries. Mr. McGrath is well placed, culturally speaking, to understand and sympathize with Lewis. . . . One comes away with a renewed sympathy for a provocative, perceptive, contrarian and somewhat tormented soul--Wall Street Journal

McGrath is not intimidated by Lewis nor overly reverential of him; but he shows him a professional respect that ought to silence those who dismiss Lewis as a theological amateur. He points out that under its clothing of reasoned argument, Lewis' theology is always founded on a profoundly aesthetic effort: to draw us a picture of the Christian universe and our place in it that moves, attracts and persuades us, so that we say: yes, this is what life is really like, and how much more real it is than we ever imagined. A powerful achievement.--The Tablet

While readers of C. S. Lewis might assume a biography would cover his literature, this account comes from an eminent theologian and focuses on Lewis' spiritual life and conversion--and therefore is a definitive survey of Lewis' conversion and faith, recommended for spirituality holdings above all else. Dr. McGrath is the only scholar to analyze the entire collection of Lewis' letters and archives: his survey is a powerful biography combining elements of spiritual and literary analysis, and is a special pick for any Christian collection.--Midwest Book Review

If you're looking for a lively, general introduction to this multitalented thinker and writer, Alister McGrath's new biography is a good place to start.--Washington Post Book World

On the 50th anniversary of his death, this new C. S. Lewis biography succeeds in deepening the appeal of his works...The most abiding gift of "C. S. Lewis: A Life" is its fierce curiosity about the novels, letters, and books of popular philosophy that are Lewis' most substantial legacy. McGrath's biography promises to introduce new readers to those works--and inspire veteran C. S. Lewis fans to visit them again.--Christian Science Monitor

There have been plenty of biographies of Lewis--I once wrote one myself--but I do not think there has been a better one than Alister McGrath's. He is a punctilious and enthusiastic reader of all Lewis's work--the children's stories, the science fiction, the Christian apologetics and the excellent literary criticism and literary history. He is from Northern Ireland, as Lewis was himself, and he is especially astute about drawing out the essentially Northern Irish qualities of this very odd man. And he is sympathetic to the real oddness of his story.--A. N. Wilson, TheDailyBeast.com

A thoroughly researched yet very readable, chronological account of C.S. Lewis' life, his literature, and his journey from atheism to Christianity. Fifty years after his death, the words of Lewis continue to inspire many, and McGrath's biography may help to unravel some of the mystery behind his eccentric mind. Staff Pick--ForeWord Reviews

McGrath does this so limpidly, so intelligently, and so sympathetically that this biography is the one Lewis' admirers--especially those who, like him, believe that books are to be read and enjoyed--should prefer to all others.--Booklist

To the question of whether the world really needs another biography of C.S. Lewis, McGrath's lucid and unsentimental portrait of the Christian champion responds with a resounding "yes." The year 2013 marks the 50th anniversary of Lewis's death, and times have changed and evangelical sentiments have matured. McGrath offers a new and at times shocking look into the complicated life of this complex figure, in a deeply researched biography. The author takes us headlong into the heart of a Lewis we've known little about: his unconventional affair with Mrs. Jane Moore; his hostile and deceptive relationship with his father; his curiosity about the sensuality of cruelty. McGrath navigates the reader through these messy themes, ultimately landing us onto the solid ground of Lewis's postconversion legacy. He shows with skill, sympathy, dispassion, and engaging prose that Lewis, like the rest of us, did the best he could with the hand he was dealt. But he got over it, as must all those who would prefer a Lewis without shadows.--Publishers Weekly
If the item details above aren’t accurate or complete, we want to know about it. Report incorrect product info.