A Little Life - by Hanya Yanagihara 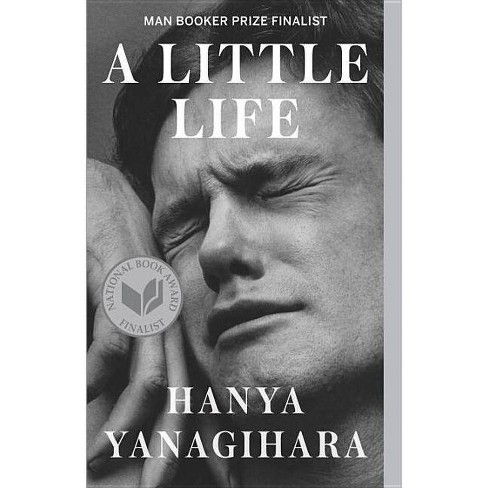 A stunning "portrait of the enduring grace of friendship" (NPR) about the families we are born into, and those that we make for ourselves. A masterful depiction of love in the twenty-first century.

A NATIONAL BOOK AWARD FINALIST - A MAN BOOKER PRIZE FINALIST - WINNER OF THE KIRKUS PRIZE A Little Life follows four college classmates--broke, adrift, and buoyed only by their friendship and ambition--as they move to New York in search of fame and fortune. While their relationships, which are tinged by addiction, success, and pride, deepen over the decades, the men are held together by their devotion to the brilliant, enigmatic Jude, a man scarred by an unspeakable childhood trauma. A hymn to brotherly bonds and a masterful depiction of love in the twenty-first century, Hanya Yanagihara's stunning novel is about the families we are born into, and those that we make for ourselves. Look for Hanya Yanagihara's new novel, To Paradise, coming in January 2022.

ONE OF THE BEST BOOKS OF THE YEAR
The New York Times - The Washington Post - The Wall Street Journal - NPR - Vanity Fair - Vogue - Minneapolis Star Tribune - St. Louis Post-Dispatch - The Guardian - O, The Oprah Magazine - Slate - Newsday - Buzzfeed - The Economist - Newsweek - People - Kansas City Star - Shelf Awareness - Time Out New York - Huffington Post - Book Riot - Refinery29 - Bookpage - Publishers Weekly - Kirkus "Astonishing." --The Atlantic "Deeply moving. . . . A wrenching portrait of the enduring grace of friendship." --NPR "Elemental, irreducible." --The New Yorker "Hypnotic. . . . An intimate, operatic friendship between four men." --The Economist "Capacious and consuming. . . . Immersive." --The Boston Globe "Beautiful." --Los Angeles Times "Exquisite. . . . It's not hyperbole to call this novel a masterwork--if anything that word is simply just too little for it." --San Francisco Chronicle "Remarkable. . . . An epic study of trauma and friendship written with such intelligence and depth of perception that it will be one of the benchmarks against which all other novels that broach those subjects (and they are legion) will be measured. . . . A Little Life announces [Yanagihara] as a major American novelist." --The Wall Street Journal "Utterly gripping. Wonderfully romantic and sometimes harrowing, A Little Life kept me reading late into the night, night after night." --Edmund White "Spellbinding . . . . An exquisitely written, complex triumph." --O, The Oprah Magazine "Drawn in extraordinary detail by incantatory prose. . . . Affecting and transcendent." --The Washington Post "[A Little Life] lands with a real sense of occasion: the arrival of a major new voice in fiction. . . . Yanagihara's achievement has less to do with size . . . than with the breadth and depth of its considerable power, which speaks not to the indomitability of the spirit, but to the fragility of the self." --Vogue

"Exquisite. . . . The book shifts from a generational portrait to something darker and more tender: an examination of the depths of human cruelty, counterbalanced by the restorative powers of friendship." --The New Yorker

"A book unlike any other. . . . A Little Life asks serious questions about humanism and euthanasia and psychiatry and any number of the partis pris of modern western life. . . . A devastating read that will leave your heart, like the Grinch's, a few sizes larger." --The Guardian

"A Little Life is unlike anything else out there. Over the top, beyond the pale and quite simply unforgettable." --The Independent

"Piercing. . . . [Yanagihara is] an author with the talent to interrogate the basest and most beautiful extremes of human behaviour with sustained, bruising intensity." --The Times Literary Supplement

Hanya Yanagihara is the author of"The People in the Trees."She lives in New York City.

"From the Hardcover edition.""

The Song of Achilles - (P.S.) by Madeline Miller (Paperback)

Lie with Me - by Philippe Besson

The People in the Trees - by Hanya Yanagihara (Paperback)

To Paradise - by Hanya Yanagihara (Hardcover)

5 out of 5 stars
Would recommend
Sarhrose - 7 months ago, Verified purchaser
A life changing story. The best book I’ve ever read.
3 guests found this review helpful. Did you?

5 out of 5 stars
Would recommend
Jaeden - 1 year ago
The best novel of all time. Please read this is you have a chance, its very saddening and soul-crushing but wow I love this book and Hanya!!
8 guests found this review helpful. Did you?

read if you are prepared to be broken

5 out of 5 stars
Would recommend
shelby - 2 years ago, Verified purchaser
favorite book of all time
14 guests found this review helpful. Did you?