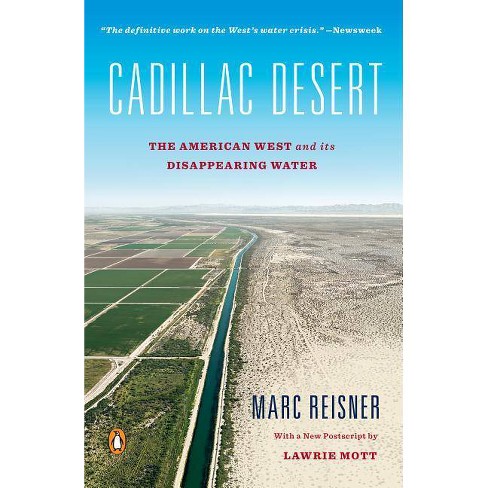 $9.99
MSRP$20.00
undefined out of 5 stars with 0 reviews
be the first!be the first! ratings
Help us improve this page

Newly updated, this timely history of the struggle to discover and control water in the American West is a tale of rivers diverted and damned, political corruption and intrigue, billion-dollar battles over water rights, and economic and ecological disaster. Winner of the National Book Critics Circle Award. Photos.

The definitive work on the West's water crisis. --Newsweek The story of the American West is the story of a relentless quest for a precious resource: water. It is a tale of rivers diverted and dammed, of political corruption and intrigue, of billion-dollar battles over water rights, of ecological and economic disaster. In his landmark book, Cadillac Desert, Marc Reisner writes of the earliest settlers, lured by the promise of paradise, and of the ruthless tactics employed by Los Angeles politicians and business interests to ensure the city's growth. He documents the bitter rivalry between two government giants, the Bureau of Reclamation and the U.S. Army Corps of Engineers, in the competition to transform the West. Based on more than a decade of research, Cadillac Desert is a stunning expose and a dramatic, intriguing history of the creation of an Eden--an Eden that may only be a mirage. This edition includes a new postscript by Lawrie Mott, a former staff scientist at the Natural Resources Defense Council, that updates Western water issues over the last two decades, including the long-term impact of climate change and how the region can prepare for the future.

Masterful. . .Among the most influential environmental books published by an American since Silent Spring.
--San Francisco Examiner Essential background reading for anyone who cares about the drought ravaging the West and the region's prospects for changing course before it is too late.
--Mark Hertsgaard, The Daily Beast Timely and of national interest. . . . Resiner captures Western water history in Cinemascope and Technicolor. . . . lawmakers, taxpayers, hurry up and read this book.
--The Washington Post The scale of this book is as staggering as that of Hoover Dam. Beautifully written and meticulously researched, it spans our century-long effort to moisten the arid West. . . . Anyone thinking of moving west of the hundredth meridian should read this book before they call their real estate agent.
--St. Louis Post-Dispatch A revealing, absorbing, often amusing and alarming report on where billions of [taxpayers'] dollars have gone-- and where a lot more are going . . . [Reisner] has put the story together in trenchant form.
--The New York Times Book Review

Marc Reisner worked for many years at the Natural Resources Defense Council. In 1979, he received an Alicia J. Patterson Journalism Fellowship and began the research for Cadillac Desert. He was also the author of Game Wars: The Undercover Pursuit of Wildlife Poachers and A Dangerous Place: California's Unsettling Fate. Resisner died in 2000. Lawrie Mott, formerly an environmental heath scientist with the Natural Resources Defense Council, lives in a Bay Area county that receives all its water from local supplies. From Marc Reisner, her late husband, she learned about water in the West at their dinner table and during long drives through western states. Mott received her B.A. from the University of California at Santa Cruz and her M.S. from Yale.
If the item details above aren’t accurate or complete, we want to know about it. Report incorrect product info.