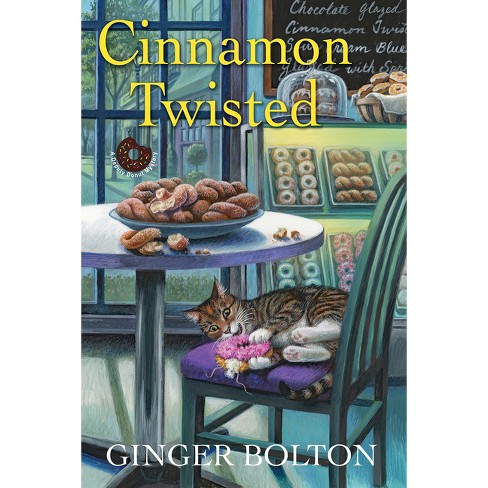 Weeks before summer begins, Deputy Donut Café owner Emily Westhill has it all--a tabby cat by her side, cinnamon twists powdered to perfection, and a murderer on her case . . . An ordinary late-spring afternoon for Deputy Donut Cafe owner Emily Westhill becomes one that will remain baked into her memory from the moment a customer gives Emily's cat a toy donut and then flees Deputy Donut, dropping an earring in her panic. Concerned about the customer, Emily attempts to return the earring . . . only this time the customer doesn't have a pulse. Things get more complicated when an ambitious police detective finds the earring and an unsealed envelope addressed to Emily at the murder scene. The envelope contains a cryptic letter and a fading photograph of a woman standing in front of Emily's house. Why did the customer grab her cinnamon twists and flee Deputy Donut? With the detective eying Emily as a prime suspect, Emily is determined to find out. But once a donut-shaped murder weapon is discovered in her own backyard, Emily has no time to lose as she pulls apart the connection between the victim and the strange history of her property--while stopping the real culprit from ensuring her fate is done and sugar-dusted . . .

Ginger Bolton is the pseudonym of an Agatha-nominated cozy mystery author. She is the author of the Deputy Donut Mystery series and is very fond of donuts, coffee, and coffee shops that encourage patrons to linger and chat. Ginger lives in a rural area surrounded by cozy villages. When she isn't reading, writing, or daydreaming while gazing out windows, she walks her dogs, plays an electric piano (she uses earphones so as not to frighten the wildlife), creates minor disasters in her kitchen, and occasionally takes part in local amateur theater productions, which, intended or not, become comedies. Visit her online at GingerBolton.com.
If the item details above aren’t accurate or complete, we want to know about it.

The Vanishing Half - by Brit Bennett