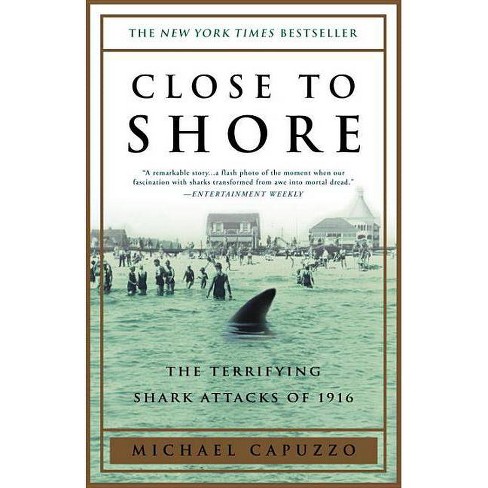 Combining rich historical detail and a harrowing, pulse-pounding narrative, Close to Shore brilliantly re-creates the summer of 1916, when a rogue Great White shark attacked swimmers along the New Jersey shore, triggering mass hysteria and launching the most extensive shark hunt in history. In July 1916 a lone Great White left its usual deep-ocean habitat and headed in the direction of the New Jersey shoreline. There, near the towns of Beach Haven and Spring Lake--and, incredibly, a farming community eleven miles inland--the most ferocious and unpredictable of predators began a deadly rampage: the first shark attacks on swimmers in U.S. history. Capuzzo interweaves a vivid portrait of the era and meticulously drawn characters with chilling accounts of the shark's five attacks and the frenzied hunt that ensued. From the unnerving inevitability of the first attack on the esteemed son of a prosperous Philadelphia physician to the spine-tingling moment when a farm boy swimming in Matawan Creek feels the sandpaper-like skin of the passing shark, Close to Shore is an undeniably gripping saga. Heightening the drama are stories of the resulting panic in the citizenry, press and politicians, and of colorful personalities such as Herman Oelrichs, a flamboyant millionaire who made a bet that a shark was no match for a man (and set out to prove it); Museum of Natural History ichthyologist John Treadwell Nichols, faced with the challenge of stopping a mythic sea creature about which little was known; and, most memorable, the rogue Great White itself moving through a world that couldn't conceive of either its destructive power or its moral right to destroy. Scrupulously researched and superbly written, Close to Shore brings to life a breathtaking, pivotal moment in American history. Masterfully written and suffused with fascinating period detail and insights into the science and behavior of sharks, Close to Shore recounts a breathtaking, pivotal moment in American history with startling immediacy.

"A remarkable read . . . a flash photo of the moment when our fascination with sharks transformed from awe into mortal dread."
--Entertainment Weekly "The most perfect beach book ever. Better than Jaws-an amazing story, terrific writing, and the Gilded Age setting is fascinating. I loved it."
--Linda Marotta, Shakespeare & Company, New York City

"Popular history meets popular science in this thrilling shark story. As in Seabiscuit, the author interweaves social history with a suspenseful story told from different characters' points of view, including that most fascinating character of all: the shark itself."
--Arsen Kashkashian, Boulder Book Store, Boulder, Colorado

"A riveting account of the terrorizing shark attacks [of 1916]. Meticulously researched, it provides fascinating information about the history of the great white shark as well as a social commentary of America during World War I. Informative, entertaining, enthralling."
--Tova Beiser, Brown University Bookstore, Providence, Rhode Island

Nominated for the Pulitzer Prize four times and a National Magazine Award finalist, Michael Capuzzo has been a feature writer for the Philadelphia Inquirer and Miami Herald. His stories have also appeared in Esquire, Sports Illustrated, Life, and Reader's Digest. He lives with his wife and two children in rural New Jersey.
If the item details above aren’t accurate or complete, we want to know about it.