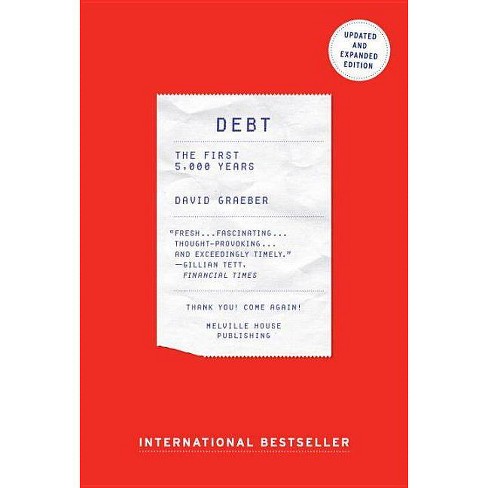 The groundbreaking international best-seller that turns everything you think about money, debt, and society on its head--from the "brilliant, deeply original political thinker" David Graeber (Rebecca Solnit, author of Men Explain Things to Me) Before there was money, there was debt. For more than 5,000 years, since the beginnings of the first agrarian empires, humans have used elaborate credit systems to buy and sell goods--that is, long before the invention of coins or cash. It is in this era that we also first encounter a society divided into debtors and creditors--which lives on in full force to this day. So says anthropologist David Graeber in a stunning reversal of conventional wisdom. He shows that arguments about debt and debt forgiveness have been at the center of political debates from Renaissance Italy to Imperial China, as well as sparking innumerable insurrections. He also brilliantly demonstrates that the language of the ancient works of law and religion (words like "guilt," "sin," and "redemption") derive in large part from ancient debates about debt, and shape even our most basic ideas of right and wrong. We are still fighting these battles today.

Winner of the Bateson Book Prize awarded by the Society for Cultural Anthropology and the Bread and Roses Award for Radical Literature
"Written in a brash, engaging style, the book is also a philosophical inquiry into the nature of debt -- where it came from and how it evolved." --Thomas Meaney, The New York Times Book Review [A] groundbreaking study...opened up a vibrant and ongoing conversation about the evolution of our economic system by challenging conventional accounts of the origins of money and markets; relationships of credit and debt, he showed, preceded the development of coinage and cash. --Astra Taylor, The New Yorker

"Debt [is] meticulously and deliciously detailed." --Ben Ehrenreich, Los Angeles Times Exhausting...Engaging...An authoritative account of the background to the recent crisis. Both erudite and impertinent, [Graeber's] book helps illuminate the omissions of the current debate and the tacit political conflicts that lurk behind technical budget questions. --Robert Kuttner, The New York Review of Books Fascinating... [An] extraordinary book, at once learned and freewheeling. --Benjamin Kunkel, London Review of Books

"One of the year's most influential books. Graeber situates the emergence of credit within the rise of class society, the destruction of societies based on 'webs of mutual commitment' and the constantly implied threat of physical violence that lies behind all social relations based on money." --Paul Mason, The Guardian An alternate history of the rise of money and markets, a sprawling, erudite, provocative work. --Drake Bennett, Bloomberg Businessweek "[A] formidable piece of anthropological scholarship... [Graeber] demonstrates how a new understanding of debt might provide us with some clues for the future." --Justin E. H. Smith, Bookforum "An absolutely indispensable--and enormous--treatise on the history of money and its relationship to inequality in society." --Cory Doctorow, BoingBoing

[A]n engaging book. Part anthropological history and part provocative political argument, it's a useful corrective to what passes for contemporary conversation about debt and the economy.
--Jesse Singal, Boston Globe "The book is more readable and entertaining than I can indicate... It is a meditation on debt, tribute, gifts, religion and the false history of money. Graeber is a scholarly researcher, an activist and a public intellectual. His field is the whole history of social and economic transactions." --Peter Carey, The Observer "Graeber helps by exposing the bad old world of debt, and clearing the way for a new horizon beyond commodification." -- The New Left Review Terrific... In the best anthropological tradition, he helps us reset our everyday ideas by exploring history and other civilizations, then boomeranging back to render our own world strange, and more open to change.
--Raj Patel, The Globe and Mail Fresh... fascinating... Graeber's book is not just thought-provoking, but also exceedingly timely.
--Gillian Tett, Financial Times (London) Remarkable.
--Giles Fraser, BBC RADIO 4 An amazing debut - conversational, pugnacious, propulsive
--Times Higher Education (UK) Graeber's book has forced me to completely reevaluate my position on human economics, its history, and its branches of thought. A Marxism without Graeber's anthropology is beginning to feel meaningless to me.
--Charles Mudede, The Stranger The world of borrowing needs a little demystification, and David Graeber's Debt is a good start.
--The L Magazine Controversial and thought-provoking, an excellent book.
--Booklist This timely and accessible book would appeal to any reader interested in the past and present culture surrounding debt, as well as broad-minded economists.
--Library Journal

Praise for David Graeber A brilliant, deeply original political thinker.
--Rebecca Solnit, author of A Paradise Built in Hell "I consider him the best anthropological theorist of his generation from anywhere in the world."
--Maurice Bloch, Professor of Anthropology at the London School of Economics

"If anthropology consists of making the apparently wild thought of others logically compelling in their own cultural settings and intellectually revealing of the human condition, then David Graeber is the consummate anthropologist. Not only does he accomplish this profound feat, he redoubles it by the critical task--now more urgent than ever--of making the possibilities of other people's worlds the basis for understanding our own."
--Marshall Sahlins, Charles F. Grey Distinguished Service Professor Emeritus of Anthropology and of Social Sciences at the University of Chicago

David Graeber (1961-2020) was a professor of anthropology at the London School of Economics. One of the original organizers of Occupy Wall Street, Graeber was also the author of Utopia of Rules and wrote widely for publications such as The Guardian, Harper's, The Baffler, n+1, The Nation, The New Inquiry, and The New Left Review.
If the item details above aren’t accurate or complete, we want to know about it. Report incorrect product info.