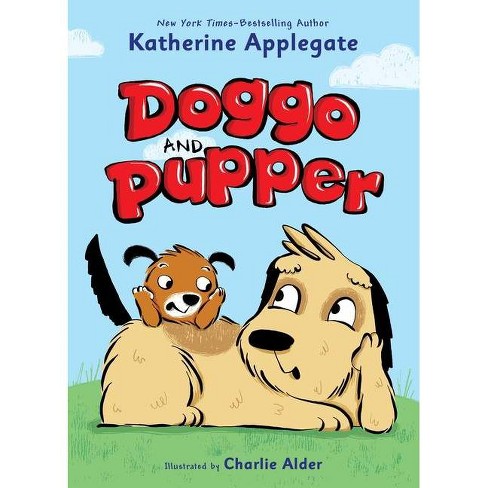 An old dog has to welcome a new puppy to the household, in this chapter book by #1 New York Times-bestselling author Katherine Applegate.

An old dog has to welcome a new puppy to the household, in this chapter book by #1 New York Times bestselling author Katherine Applegate.

Doggo is used to things being a certain way in his family. He likes routine. Cat says he's become boring. That is, until Pupper shows up! Pupper is playful and messy, and turns the house upside down. Soon, the humans realize that Pupper needs some training, and off he goes to puppy school. When Pupper comes back, he's well-behaved. He's not playful. He's not messy. But Doggo soon realizes that Pupper also isn't happy. So Doggo steps in to help, and rediscovers what it means to have fun. Doggo and Pupper launches a delightful new series by beloved author Katherine Applegate, featuring illustrations by Charlie Alder.

Alder's bark-out-loud illustrations are cartoon-like and colorful.... The text is spaced to train a young reader's eyes to scan from the top of the page to bottom. Containing seven short chapters, this tale is a great match for children on the path to chapter books. --School Library Journal

Applegate introduces another quiet, resilient protagonist who -- like the caged gorilla in The One and Only Ivan and the working-class boy in Crenshaw -- speaks movingly to a noisy, fractious world. --The Washington Post

The story's wit and humor keep it from being heavy-handed, as do vivid portrayals of minor characters, especially Bongo, the sarcastic crow who is Red's best friend. This is a book made for family sharing and discussion.--Raleigh News & Observer

A book to read that sends the right message. --Parents magazine

Timely, necessary, and brimming with heart. --Booklist, starred review Newbery Award-winning author Applegate meets high expectations in this tale told by a tree named Red, a red oak who is "two hundred and sixteen rings old." ... Another stunning effort from Applegate. This thoughtful read is a top choice for middle graders. --School Library Journal, starred review This swiftly moving yet contemplative read is great for early middle grade, reluctant or tentative readers, or precocious younger students. A deceptively simple, tender tale in which respect, resilience, and hope triumph. --Kirkus Reviews, starred review This gentle yet powerful book is suitable for all ages...and its message remains more vital than ever. --BookPage

Inspires hope for positive change. Perfect for a powerful classroom read, Wishtree is another winner for Applegate. --Voices of Youth Advocates, starred review Praise for Crenshaw: A New York Times Bestseller
A Publishers Weekly Bestseller This accessible and moving novel demonstrates how the creative resilience of a child's mind can soften difficult situations, while exploring the intersection of imagination and truth. --Publishers Weekly, starred review A compelling and unflinchingly honest treatment of a difficult topic. --School Library Journal, starred review The tone is warm and, occasionally, quirkily funny, but it doesn't sugarcoat the effects of hunger and vulnerability. --The Horn Book, starred review

Katherine Applegate is the New York Times bestselling author of Wishtree, Crenshaw, and Home of the Brave, all from Feiwel & Friends, and The One and Only Ivan, winner of the Newbery Medal. Doggo and Pupper is her first chapter book for younger readers. She lives in Los Angeles with her family.

Charlie Alder is the illustrator of Chicken Break written by Cate Berry. She lives in England with her family.
If the item details above aren’t accurate or complete, we want to know about it. Report incorrect product info.

Get it by Wed, Aug 4 with free 2-day shipping