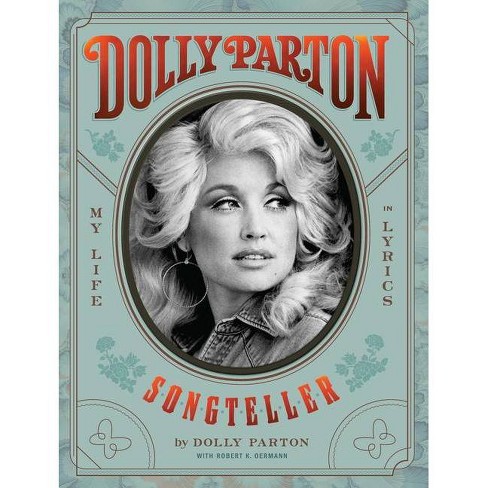 "For the first time ever, ... singer-songwriter Dolly Parton brings you behind the lyrics of 175 of her songs to reveal the personal stories and ... memories that have inspired sixty years of songwriting. Lushly illustrated and told in Dolly's ... voice, this ... collection offers an intimate, exclusive look at the colorful life, prolific career, and rags-to-rhinestones journey of one of the most revered entertainers of our time"--

Dolly Parton, Songteller: My Life in Lyrics is a landmark celebration of the remarkable life and career of a country music and pop culture legend. As told by Dolly Parton in her own inimitable words, explore the songs that have defined her journey. Illustrated throughout with previously unpublished images from Dolly Parton's personal and business archives. Mining over 60 years of songwriting, Dolly Parton highlights 175 of her songs and brings readers behind the lyrics. - Packed with never-before-seen photographs and classic memorabilia
- Explores personal stories, candid insights, and myriad memories behind the songs Dolly Parton, Songteller: My Life in Lyrics reveals the stories and memories that have made Dolly a beloved icon across generations, genders, and social and international boundaries. Containing rare photos and memorabilia from Parton's archives, this book is a show-stopping must-have for every Dolly Parton fan. - Learn the history behind classic Parton songs like Jolene, 9 to 5, I Will Always Love You, and more.
- The perfect gift for Dolly Parton fans (everyone loves Dolly!) as well as lovers of music history and country Add it to the shelf with books like Coat of Many Colors by Dolly Parton, The Beatles Anthology by The Beatles, and Born to Run by Bruce Springsteen.

ldquo; A hefty retrospective on the six-decade career of a country music superstar who tells stories in song. Parton has been mining her East Tennessee roots for crowd-pleasing songs ever since she wrote her first tune, about a corncob doll, at around the age of 6. With Nashville-based music journalist Oermann, she serves up her highest-grade ore in a handsomely produced collection of the lyrics to more than 175 of her songs, some in print for the first time. All songs have brief introductions on topics such as when and how Parton wrote them, and longer pieces show her evolution from lsquo;a hard-core country artistrsquo; with a lsquo;girlish soprano tremolorsquo; to a multifaceted star also at ease with pop, gospel, and bluegrass. Moving chronologically through the artist's life, the book reveals her abiding passions with thematic juxtapositions of songs, which range from lsquo;9 to 5rsquo; to the elegiac ballads lsquo;Jolenersquo; (her song lsquo;most performed by othersrsquo;) and lsquo;I Will Always Love Yoursquo; (lsquo;For what she did with that, I will always love you, Whitney Houstonrsquo;). Hundreds of color and black-and-white photos of Parton and others display her over-the-top tastes in fashion and wigs faithful to her motto: lsquo;Leave no rhinestone unturned.rsquo; Parton conceals more than she reveals about her 50-plus-year marriage to the reclusive Carl Dean and whether she's had affairs (lsquo;Well, I don't admit or deny anythingrsquo;). She is frank, however, about professional setbacks. For example, when she was starting out in the industry, every major record company on Nashville's Music Row turned her down as a vocalist. In the final pages, Parton sounds a poignant note in the lyrics to a song written with Kent Wells and released during the pandemic. The song, lsquo;When Life Is Good Again, rsquo; is the hymnlike lament of a repentant sinner who vows to change lsquo;when life is good again.rsquo; A splashy, entertaining guide to the lyrics of one of the most popular musicians of our time. rdquo; mdash;Kirkus Starred Reviews

Robert K. Oermann is a Nashville-based music journalist who is considered the unofficial historian of Nashville's musical heritage. He has written several books on country music, including Finding Her Voice: The Saga of Women in Country Music, which won the ASCAP Deems Taylor Award for music book excellence. He lives with his wife in Nashville, Tennessee. Dolly Parton is the most honored and revered female country singer-songwriter of all time. Achieving 25 RIAA-certified gold, platinum, and multi-platinum awards, she has had 26 songs reach #1 on the Billboard country charts, a record for a female artist. Parton recently became the first country artist honored as Grammy MusiCares Person of the Year given out by NARAS. She has 41 career Top 10 country albums, a record for any artist, and 110 career-charted singles over the past 40 years. In 2014, the RIAA recognized her impact on recorded music with a plaque commemorating more than 100 million units sold worldwide. Her 2016 #1 album, Pure & Simple, which topped the Billboard Top Country Albums and Americana/Folk Albums charts and debuted at No. 1 in the U.S., Canada, U.K. and Australia, added to that massive tally. She has garnered ten Grammy Awards and 49 nominations, including the Lifetime Achievement Award and a 2020 win with for KING & COUNTRY for their collaboration on God Only Knows; 10 Country Music Association Awards, including Entertainer of the Year; five Academy of Country Music Awards, also including a nod for Entertainer of the Year; four People's Choice Awards; and three American Music Awards. In 1999, Parton was inducted as a member of the coveted Country Music Hall of Fame. Parton has donated over 130 million books to children around the world with her Imagination Library. Her children's book, Coat of Many Colors, was dedicated to the Library of Congress to honor the Imagination Library's 100 millionth book donation. From her Coat of Many Colors while working 9-to-5, no dream is too big and no mountain too high for the country girl who turned the world into her stage.
If the item details above aren’t accurate or complete, we want to know about it. Report incorrect product info.