Enola Holmes and the Black Barouche - by Nancy Springer 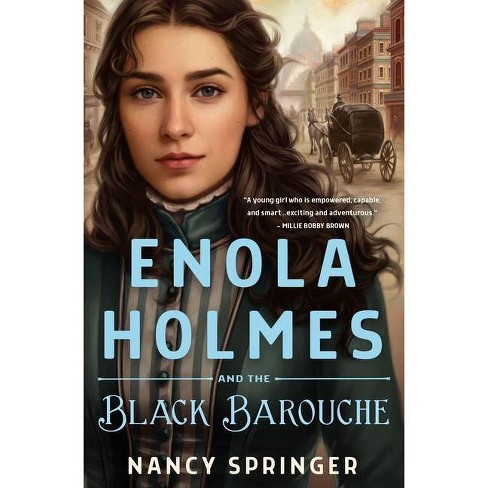 A young girl who is empowered, capable, and smart...the Enola Holmes book series convey an impactful message that you can do anything if you set your mind to it, and it does so in an exciting and adventurous way.--Millie Bobby Brown

Enola Holmes is back! Nancy Springer's nationally bestselling series and breakout Netflix sensation returns to beguile readers young and old in Enola Holmes and the Black Barouche. Enola Holmes is the much younger sister of her more famous brothers, Sherlock and Mycroft. But she has all the wits, skills, and sleuthing inclinations of them both. At fifteen, she's an independent young woman--after all, her name spelled backwards reads 'alone'--and living on her own in London. When a young professional woman, Miss Letitia Glover, shows up on Sherlock's doorstep, desperate to learn more about the fate of her twin sister, it is Enola who steps up. It seems her sister, the former Felicity Glover, married the Earl of Dunhench and per a curt note from the Earl, has died. But Letitia Glover is convinced this isn't the truth, that she'd know--she'd feel--if her twin had died. The Earl's note is suspiciously vague and the death certificate is even more dubious, signed it seems by a John H. Watson, M.D. (who denies any knowledge of such). The only way forward is for Enola to go undercover--or so Enola decides at the vehement objection of her brother. And she soon finds out that this is not the first of the Earl's wives to die suddenly and vaguely--and that the secret to the fate of the missing Felicity is tied to a mysterious black barouche that arrived at the Earl's home in the middle of the night. To uncover the secrets held tightly within the Earl's hall, Enola is going to require help--from Sherlock, from the twin sister of the missing woman, and from an old friend, the young Viscount Tewkesbury, Marquess of Basilwether! Enola Holmes returns in her first adventure since the hit Netflix movie brought her back on the national bestseller lists, introducing a new generation to this beloved character and series.

NANCY SPRINGER is the author of the nationally bestselling Enola Holmes novels, including The Case of the Missing Marquess, which was made into the hit Netflix movie, Enola Holmes. She is the author of more than 50 other books for children and adults. She has won many awards, including two Edgar Awards, and has been published in more than thirty countries. She lives in Florida.
If the item details above aren’t accurate or complete, we want to know about it.

Enola Holmes and the Elegant Escapade - by Nancy Springer (Hardcover)

Enola Holmes and the Black Barouche - by Nancy Springer (Paperback)

Enola Holmes and the Elegant Escapade - by Nancy Springer (Hardcover)

Smart and spunky, with a clever mystery

4 out of 5 stars
PhyllisE - 1 year ago
Thanks to Criminal Element and St. Martin's Publishing Group/Wednesday Books for an advance reader copy. All comments and opinions are my own. Smart and spunky, clever and confident - Enola Holmes is the fifteen-year-old much younger sister of the famous detective Sherlock Holmes. Living on her own in London, Enola uses disguises and her wits to find missing people - similar to the techniques of her older brother, but that's where the similarity ends. This is the seventh in the series, but you can begin with this middle grade novel since the Prologue, written by Sherlock Holmes, summarizes all the earlier escapades and quickly brings the reader up-to-date. Of course you'll want to go back and read the earlier books as they are all fun, exciting, and satisfying to read about an independent young feminist in a typically restrictive era. Told in first person by Enola ("Alone" spelled backwards) we not only join her as she solves the mystery of the missing twin sister, but author Nancy Springer includes various interesting details about the clothing, etiquette, and protocols of London in 1889. Who knew a woman seen without a hat was considered scandalous? Humor, excitement, and a clever solution to the mystery - this is all you need to enjoy an entertaining novel for middle grade readers and everyone beyond.
1 guest found this review helpful. Did you?