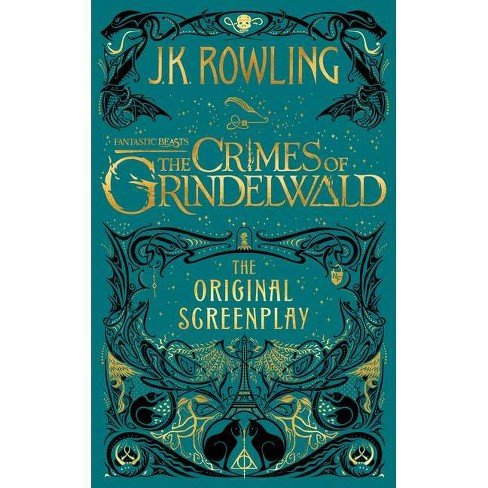 Rowling's five-film Fantastic Beasts adventure series continues with the original screenplay for "Fantastic Beasts: The Crimes of Grindelwald, " opening in theaters on November 6.

J.K. Rowling's five-film Fantastic Beasts adventure series continues with the original screenplay for Fantastic Beasts: The Crimes of GrindelwaldAt the end of Fantastic Beasts and Where to Find Them, the powerful Dark wizard Gellert Grindelwald was captured in New York with the help of Newt Scamander. But, making good on his threat, Grindelwald escapes custody and sets about gathering followers, most unsuspecting of his true agenda: to raise pure-blood wizards up to rule over all non-magical beings. In an effort to thwart Grindelwald's plans, Albus Dumbledore enlists Newt, his former Hogwarts student, who agrees to help once again, unaware of the dangers that lie ahead. Lines are drawn as love and loyalty are tested, even among the truest friends and family, in an increasingly divided wizarding world. This second original screenplay from J.K. Rowling, illustrated with stunning line art from MinaLima, expands on earlier events that helped shape the wizarding world, with some surprising nods to the Harry Potter stories that will delight fans of both the books and films.

J.K. Rowling is the author of the record-breaking, multi-award-winning Harry Potter novels. Loved by fans around the world, the series has sold over 500 million copies, been translated into over 80 languages, and made into eight blockbuster films. She has written three companion volumes in aid of charity: Quidditch Through the Ages and Fantastic Beasts and Where to Find Them (in aid of Comic Relief UK and Lumos), and The Tales of Beedle the Bard (in aid of Lumos), as well as a screenplay inspired by Fantastic Beasts and Where to Find Them, which marked the start of a five-film series to be written by the author. She has also collaborated on a stage play, Harry Potter and the Cursed Child Parts One and Two, which opened in London's West End in the summer of 2016 and on Broadway in the spring of 2018. In 2012 J.K. Rowling's digital company Pottermore was launched, where fans can enjoy news, features, and articles, as well as original content from J.K. Rowling. She is also the author of The Casual Vacancy, a novel for adult readers, and the Strike crime series, written under the pseudonym Robert Galbraith. She has received many awards and honors, including an OBE and Companion of Honour, France's Légion d'honneur, and the Hans Christian Andersen Award.
If the item details above aren’t accurate or complete, we want to know about it.

Fantastic Beasts and Where to Find Them: The Original Screenplay (Hardcover) By J.K. Rowling

Fantastic Beasts and Where to Find Them: The Illustrated Edition (Hardcover) (J. K. Rowling & Newt Scamander)

The Crimes of Grindelwald

5 out of 5 stars
Would recommend
Magical Girl - 4 years ago, Verified purchaser
J. K. Rowling does not disappoint in the second Fantastic Beasts in the series. The characters are creative and the beasts are definitely unique. If you love adventure and fantasy- I highly recommend this book!
6 guests found this review helpful. Did you?

5 out of 5 stars
Would recommend
Sillygoose3116 - 4 years ago, Verified purchaser
This book is written in play form and is exactly like the movie. I placed this order online and picked it up from the store. They processed the order really quickly and pickup was super easy.
7 guests found this review helpful. Did you?

5 out of 5 stars
Would recommend
Emma - 4 years ago
Fantastic!!! Great read!
6 guests found this review helpful. Did you?

5 out of 5 stars
Would recommend
Lindsey R - 4 years ago, Verified purchaser
Great book! Easy read for any Harry Potter fan.
6 guests found this review helpful. Did you?