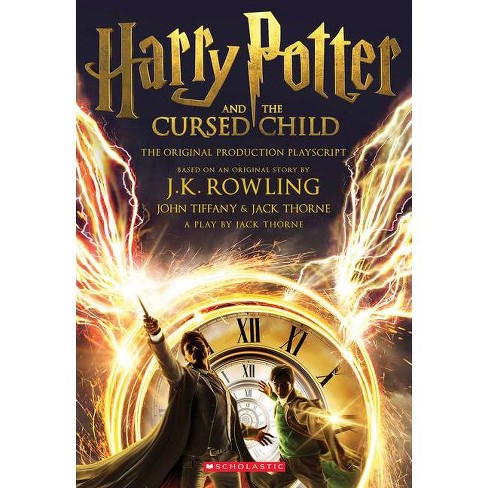 Based on an original story by Rowling, Tiffany, and Thorne, the play "Harry Potter and the Curse Child" opened in London's West End in 2016 and will begin a run on Broadway in April 2018. This revised edition updates the "special rehearsal edition" with the conclusive and final dialogue from the play and includes background information.

Praise for the playscript of Harry Potter and the Cursed Child Parts One and TwoA compelling, stay-up-all-night read... The suspense here is electric and nonstop. -- The New York TimesFans can breathe easy knowing this play has been respectfully and lovingly wrought. Tensions thrum, spells fly but at center stage, as always in the Potterverse, is the overriding importance of love and friendship, especially in the face of danger." -- Booklist, starred reviewWhether encountered on stage or on the page, this trip back into the magical world of Hogwarts is thrilling. -- Telegraph

J.K. Rowling is the author of the seven Harry Potter novels, which have sold over 450 million copies and have been translated into 79 languages, and three companion books originally published for charity. She has also written The Casual Vacancy, a novel for adults, and, under the pseudonym Robert Galbraith, is the author of the Cormoran Strike crime series. In 2016 J.K. Rowling made her screenwriting debut and was a producer on the film Fantastic Beasts and Where to Find Them, a further extension of the Wizarding World and the start of a new five-film series.

Jack Thorne writes for theater, film, television, and radio. His theater credits include Hope and Let the Right One In, both directed by John Tiffany, Junkyard, a Headlong, Rose Theatre Kingston, Bristol Old Vic & Theatr Clwyd co-production, The Solid Life of Sugarwater for the Graeae Theatre Company, Bunny for the Edinburgh Fringe Festival, Stacy for the Trafalgar Studios, 2nd May 1997 and When You Cure Me for the Bush. His adaptations include The Physicists for the Donmar Warehouse and Stuart: A Life Backwards for Hightide. On film his credits include War Book, A Long Way Down, and The Scouting Book for Boys. For television his credits include The Last Panthers, Don't Take My Baby, This Is England, The Fades, Glue, Cast-Offs, and National Treasure. He won BAFTAs in 2016 for Best Mini-Series (This Is England '90) and Best Single Drama (Don't Take My Baby), and in 2012 for Best Drama Series (The Fades) and Best Mini-Series(This Is England '88).

John Tiffany directed Once for which he was the recipient of multiple awards on Broadway, in the West End, and internationally. Other recent credits include The Glass Menagerie at A.R.T. and on Broadway, EIF, and the West End, and The Ambassador at BAM. As Associate Director of the Royal Court, his work includes The Twits, Hope, and The Pass. He was the director of Let the Right One In for the National Theatre of Scotland, which transferred to the Royal Court, West End, St. Ann's Warehouse, and toured internationally. His other work for the National Theatre of Scotland includes Macbeth (also Lincoln Center and Broadway), Enquirer, The Missing, Peter Pan, The House of Bernarda Alba, Transform Caithness: Hunter, Be Near Me, Nobody Will Ever Forgive Us, The Bacchae (also Lincoln Center), Elizabeth Gordon Quinn, Home: Glasgow, and Black Watch, which toured internationally and for which he won the Olivier and Critics' Circle awards. He was Associate Director of the Traverse Theatre from 1996 to 2001, Paines Plough from 2001 to 2005, the National Theatre of Scotland from 2005 to 2012, and was a Radcliffe Fellow at Harvard University in the 2010-2011 academic year.
If the item details above aren’t accurate or complete, we want to know about it. Report incorrect product info.