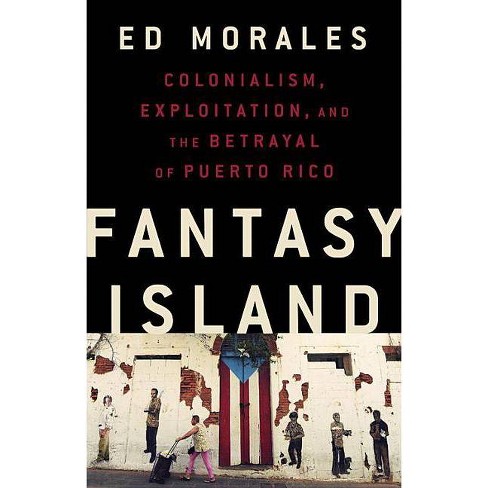 $18.89
MSRP$28.00
0 out of 5 stars with 0 reviews
be the first!be the first! ratings
Shipping
Free standard shipping with RedCard
Help us improve this page

A crucial, clear-eyed accounting of Puerto Rico's 122 years as a colony of the US. Since its acquisition by the US in 1898, Puerto Rico has served as a testing ground for the most aggressive and exploitative US economic, political, and social policies. The devastation that ensued finally grew impossible to ignore in 2017, in the wake of Hurricane Marï¿½a, as the physical destruction compounded the infrastructure collapse and trauma inflicted by the debt crisis. In Fantasy Island, Ed Morales traces how, over the years, Puerto Rico has served as a colonial satellite, a Cold War Caribbean showcase, a dumping ground for US manufactured goods, and a corporate tax shelter. He also shows how it has become a blank canvas for mercenary experiments in disaster capitalism on the frontlines of climate change, hamstrung by internal political corruption and the US federal government's prioritization of outside financial interests. Taking readers from San Juan to New York City and back to his family's home in the Luquillo Mountains, Morales shows us the machinations of financial and political interests in both the US and Puerto Rico, and the resistance efforts of Puerto Rican artists and activists. Through it all, he emphasizes that the only way to stop Puerto Rico from being bled is to let Puerto Ricans take control of their own destiny, going beyond the statehood-commonwealth-independence debate to complete decolonization.
If the item details above aren’t accurate or complete, we want to know about it. Report incorrect product info.