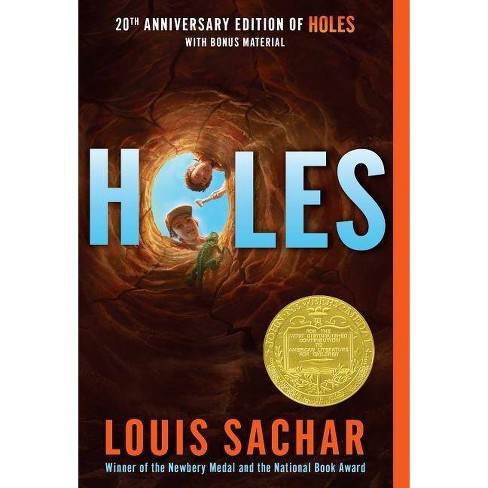 After being sent unjustly to a boys' detention center, Stanley is forced by the warden to dig holes everyday. While the warden claims it's to build character, it doesn't take Stanley long to realize there's more than character improvement going on at Camp Green Lake. Stanley decides he needs to dig up the truth about what the warden is looking for.

Dig deep in this award-winning, modern classic that will remind readers that adventure is right around the corner--or just under your feet!

Stanley Yelnats is under a curse. A curse that began with his no-good-dirty-rotten-pig-stealing-great-great-grandfather and has since followed generations of Yelnatses. Now Stanley has been unjustly sent to a boys' detention center, Camp Green Lake, where the boys build character by spending all day, every day digging holes exactly five feet wide and five feet deep. There is no lake at Camp Green Lake. But there are an awful lot of holes.

It doesn't take long for Stanley to realize there's more than character improvement going on at Camp Green Lake. The boys are digging holes because the warden is looking for something. But what could be buried under a dried-up lake? Stanley tries to dig up the truth in this inventive and darkly humorous tale of crime and punishment--and redemption. A smart jigsaw puzzle of a novel. --New York Times

Louis Sachar is the author of the #1 New York Times bestseller Holes, which won the Newbery Medal, the National Book Award, and the Christopher Award, as well as Stanley Yelnats' Survival to Camp Green Lake; Small Steps, winner of the Schneider Family Book Award; and The Cardturner, a Publishers Weekly Best Book, a Parents' Choice Gold Award recipient, and an ALA-YALSA Best Fiction for Young Adults Book. His books for younger readers include There's a Boy in the Girls' Bathroom, The Boy Who Lost His Face, Dogs Don't Tell Jokes, and the Marvin Redpost series, among many others.