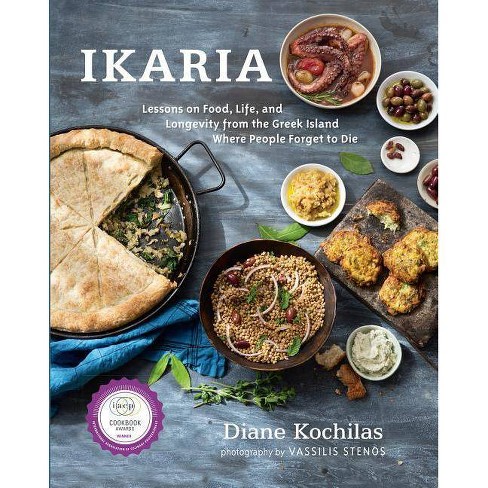 "Ikaria is mythical, beautiful, enigmatic--and, as we learned after reading the New York Times article about it, a place where residents live unaccountably long lives. Part cookbook, part travelogue, filled with gorgeous photography, stunning recipes, and interviews with locals, and packed with the often quirky secrets to a long life that Ikarians are spoon-fed at birth, Ikaria is award-winning author Diane Kochilas's ethno-culinary paean to this magical island.Here, Kochilas will marry lore to lesson and recipe to interview: we'll meet a 101-year-old weaver--the best on the island--and taste the combinations of herbs that he cooks with and that he believes give him life. We'll learn about the life-giving benefits of delicious salads both raw and cooked, the gorgeous breads and savory pies that are a part of every meal, the bean dishes that are passed down through generations, and the seafood that is at the root of the Ikarian culinary culture. filled with mouthwatering recipes and remarkable stories, this book will introduce many Americans to food as life, as only the Ikarians know it"--

Part cookbook, part travelogue, Ikaria is an introduction to the food-as-life philosophy of the Greek island blue zone and a culinary journey through luscious recipes, gorgeous photography, and captivating stories from locals. The remote and lush island of Ikaria in the northeastern Aegean is home to one of the longest-living populations on the planet, making it a blue zone. Much of this has been attributed to Ikaria's stress-free lifestyle and Mediterranean diet: daily naps, frequent sex, a little fish and meat, free-flowing wine, mindful exercise like walking and gardening, hyper-local food, strong friendships, and a deep-rooted disregard for the clock. No one knows the Ikarian lifestyle better than Chef Diane Kochilas, who has spent much of her life there. Capturing the true spirit of the island, Kochilas explains the importance of shared food, the health benefits of raw and cooked salads, the bean dishes that are passed down through generations, the greens and herbal teas that are used in the kitchen and in the teapot as medicine, and the nutritional wisdom inherent in the ingredients and recipes that have kept Ikarians healthy for so long. Ikaria is more than a cookbook. It's a portrait of the people who have achieved what so many of us yearn for: a fuller, more meaningful and joyful life, lived simply and nourished on real, delicious, seasonal foods that you can access anywhere.

Award-winning author DIANE KOCHILAS divides her time between New York, Athens, and her family's ancestral island, Ikaria, where she and her husband, Vasilis Stenos, run the Glorious Greek Kitchen cooking school. She has written 18 books on Greek cuisine. Her latest book, The Country Cooking of Greece, was hailed by the Virtual Gourmet as her masterpiece and the Best Cookbook of 2012. She lives in Athens and New York City.
If the item details above aren’t accurate or complete, we want to know about it. Report incorrect product info.