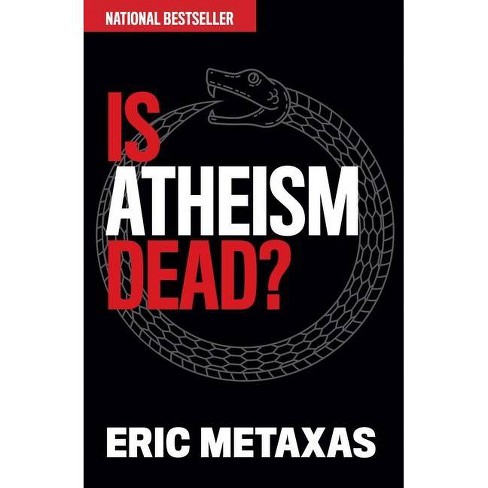 Eric Metaxas, the author of the #1 bestseller Bonhoeffer: Pastor, Martyr, Prophet, Spy, now releases his hardcover bestseller in paperback. Is Atheism Dead? is a highly entertaining, impressively wide-ranging, and decidedly provocative answer to that famous 1966 TIME cover that itself provocatively asked "Is God Dead?" In a voice that is by turns witty, muscular, and poetic, Metaxas echoes C.S. Lewis and G.K. Chesterton in cheerfully and logically making his case, along the way presenting breathtaking--and sometimes astonishing--new evidence and arguments against the idea of a Creatorless universe. Taken all together, he shows that much we have assumed about the biggest questions of human existence is in fact dramatically outdated -- and is therefore in need of the most urgent reevaluation.

ERIC METAXAS is the author of four New York Times bestsellers, including the Bonhoeffer: Pastor, Martyr, Prophet, Spy, which was named "Book of the Year" by the ECPA and sold over one million copies in nineteen languages. Called a "biography of uncommon power," it appeared on numerous 2010 "Best of the Year" lists and was ranked #21 on the Amazon.com listing of Most Highlighted Books of all time. He also hosts The Eric Metaxas Show, a nationally syndicated daily radio program airing in 120 cities on the Salem Radio Network, and Socrates in the City: Conversations on the Examined Life, broadcast on the NRB network and the Socrates in the City website. Along with his colleague John Stonestreet, Metaxas is the voice of BreakPoint, a radio commentary that is broadcast on 1,400 radio outlets with an audience of eight million. ABC News has called Metaxas a "photogenic, witty ambassador for faith in public life," and The Indianapolis Star described him as "a Protestant version of William F. Buckley." Metaxas was the keynote speaker at the 2012 National Prayer Breakfast in Washington, DC, an event attended by then-President Obama and First Lady Michelle Obama, Vice President Joe Biden, members of Congress, and other U.S. and world leaders. Previous keynote speakers have included Mother Theresa, Bono, and Tony Blair. That speech, along with Eric's essay on the experience, were put into a book, No Pressure, Mr. President: The Power of True Belief in a Time of Crisis. In 2011, Metaxas became the seventeenth recipient of the Canterbury Medal awarded by the Becket Fund for Religious Freedom. He has testified before Congress about the rise of anti-Semitism in the U.S. and abroad, and spoke at CPAC 2013 on the issue of religious freedom. In September 2013, Eric and his wife Susanne were jointly awarded the Human Life Review's "Great Defender of Life Award." Metaxas has honorary doctorates from Sewanee College, Hillsdale College, and Liberty University. His book Miracles: What They Are, Why They Happen, and How They Can Change Your Life (November 2014) hit #12 on the New York Times Bestseller list and is being translated into German, Polish, Greek, Portuguese, Hungarian, Romanian, Russian, Estonian, Slovak, Korean, Swedish, Finnish, and Croatian. His December 25, 2014 op-ed for The Wall Street Journal, titled "Science Increasingly Makes the Case for God," remains unofficially the most popular and shared piece in the paper's history, garnering over 450,000 Facebook likes and 8,000 comments.
If the item details above aren’t accurate or complete, we want to know about it. Report incorrect product info.