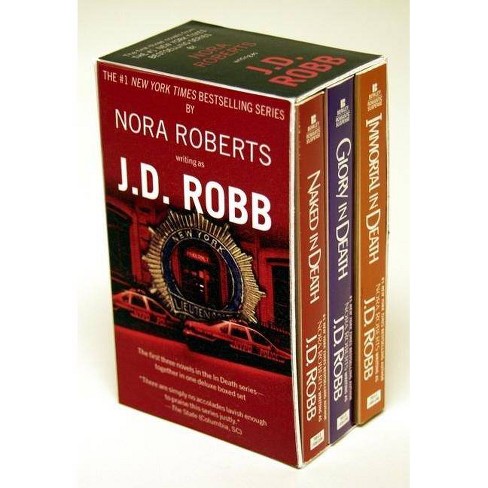 Now available in one extraordinary box set--Naked in Death, Glory in Death, and Immortal in Death--the first three novels in J.D. Robb's #1 New York Times bestselling series featuring Lieutenant Eve Dallas. NAKED IN DEATH
Eve Dallas is a New York police lieutenant using her instincts to hunt for a ruthless killer. Breaking every rule, Eve gets involved with Roarke, an Irish billionaire--and a suspect in Eve's murder investigation. But passion and seduction have rules all their own. GLORY IN DEATH
Police Lieutenant Eve Dallas has no problem finding connections between two violent crimes. Both victims were beautiful and highly successful women whose intimate relations with men of great power and wealth provide Eve with a long list of suspects--including her own lover, Roarke. IMMORTAL IN DEATH
A top model is dead, the victim of a brutal murder. Police Lieutenant Eve Dallas puts her professional life on the line to take the case when suspicion falls on her best friend, the other woman in a fatal love triangle.

Praise for the In Death series "Robb is a virtuoso."--Seattle Post-Intelligencer "It's Law & Order: SVU--in the future."--Entertainment Weekly "J. D. Robb's In Death novels are can't-miss pleasures."--#1 New York Timesbestselling author Harlan Coben "Anchored by terrific characters, sudden twists that spin the whole narrative on a dime, and a thrills-to-chills ration that will raise the neck hairs of even the most jaded reader, the J. D. Robb books are the epitome of great popular fiction."--New York Times bestselling author Dennis Lehane

J. D. Robb is the pseudonym for a #1 New York Times bestselling author of more than 200 novels, including the bestselling In Death series. There are more than 500 million copies of her books in print.
If the item details above aren’t accurate or complete, we want to know about it. Report incorrect product info.