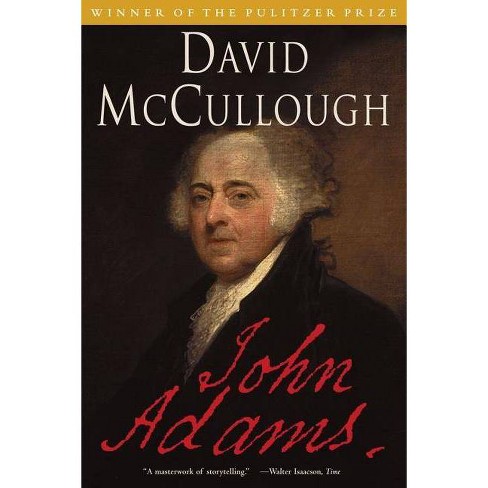 In this powerful, epic biography, McCullough unfolds the adventurous life-journey of John Adams, the brilliant, fiercely independent, often irascible, always honest Yankee patriot who spared nothing in his zeal for the American Revolution. The hardcover edition was a Pulitzer Prize winner and a "New York Times Book Review" Editor's Choice for 2001. Illustrations.

The Pulitzer Prize-winning, bestselling biography of America's founding father and second president that was the basis for the acclaimed HBO series, brilliantly told by master historian David McCullough. In this powerful, epic biography, David McCullough unfolds the adventurous life journey of John Adams, the brilliant, fiercely independent, often irascible, always honest Yankee patriot who spared nothing in his zeal for the American Revolution; who rose to become the second president of the United States and saved the country from blundering into an unnecessary war; who was learned beyond all but a few and regarded by some as "out of his senses"; and whose marriage to the wise and valiant Abigail Adams is one of the moving love stories in American history. This is history on a grand scale--a book about politics and war and social issues, but also about human nature, love, religious faith, virtue, ambition, friendship, and betrayal, and the far-reaching consequences of noble ideas. Above all, John Adams is an enthralling, often surprising story of one of the most important and fascinating Americans who ever lived.

Gordon S. Wood The New York Review of Books By far the best biography of Adams ever written...McCullough's special gift as an artist is his ability to re-create past human beings in all their fullness and all their humanity. In John and Abigail he has found characters worthy of his talent.

Marie Arana The Washington Post McCullough is one of our most gifted living writers.

Michiko Kakutani The New York Times Lucid and compelling...[Written] in a fluent narrative style that combines a novelist's sense of drama with a scholar's meticulous attention to the historical record.

David McCullough (1933-2022) twice received the Pulitzer Prize, for Truman and John Adams, and twice received the National Book Award, for The Path Between the Seas and Mornings on Horseback. His other acclaimed books include The Johnstown Flood, The Great Bridge, Brave Companions, 1776, The Greater Journey, The American Spirit, The Wright Brothers, and The Pioneers. He was the recipient of numerous honors and awards, including the Presidential Medal of Freedom, the nation's highest civilian award. Visit DavidMcCullough.com.
If the item details above aren’t accurate or complete, we want to know about it.