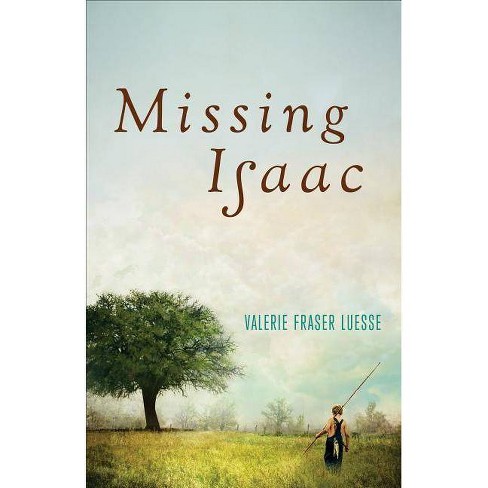 When a black field hand disappears, a wealthy white boy he has befriended sets out to find him. But Pete McLean discovers more than he bargained for--including unexpected love and difficult truths about race and class in 1960s Alabama.bama.

There was another South in the 1960s, one far removed from the marches and bombings and turmoil in the streets that were broadcast on the evening news. It was a place of inner turmoil, where ordinary people struggled to right themselves on a social landscape that was dramatically shifting beneath their feet. This is the world of Valerie Fraser Luesse's stunning debut, Missing Isaac.

It is 1965 when black field hand Isaac Reynolds goes missing from the tiny, unassuming town of Glory, Alabama. The townspeople's reactions range from concern to indifference, but one boy will stop at nothing to find out what happened to his unlikely friend. White, wealthy, and fatherless, young Pete McLean has nothing to gain and everything to lose in his relentless search for Isaac. In the process, he will discover much more than he bargained for. Before it's all over, Pete--and the people he loves most--will have to blur the hard lines of race, class, and religion. And what they discover about themselves may change some of them forever.

Isaac believed in luck. But from Pete's point of view, Isaac's luck had all run out.

When Pete McLean loses his father in the summer of 1962, his friend Isaac is one of the few people he can lean on. Though their worlds are as different as black and white, friendship knows no color. So when Isaac suddenly goes missing, Pete is determined to find out what happened--no matter what it costs him. His quest will lead him into parts of town that he knows only through rumors and introduce him to a girl who will change his life. What they discover together will change the small Southern town of Glory, Alabama--forever.

With vivid descriptions, palpable atmosphere, and unforgettable characters, debut novelist Valerie Fraser Luesse breathes life into the rural South of the 1960s--a place where ordinary people struggle to find their footing in a social landscape that is shifting beneath their feet.


"Valerie Fraser Luesse's beautiful story reveals the human heart that always beats beneath the headlines. In the process, she movingly illuminates not only the spirit of a special region but the soul of every human being who ever dared to care. Missing Isaac will break--and then heal--your heart."--J. I. Baker, journalist and author of The Empty Glass

"Welcome debut novelist Valerie Fraser Luesse to the legions of gifted Southern writers before her. Missing Isaac is the first of what we hope will be many more tales from this talented writer."--Nancy Dorman-Hickson, coauthor of Diplomacy and Diamonds and a former editor for Progressive Farmer and Southern Living magazines

"Valerie Luesse has an ear for dialogue, an eye for detail, and a profound gift for storytelling. She breathes life into these colorful Southern characters and this quirky Alabama town from the first page."--Sid Evans, editor-in-chief of Southern Living magazine


Valerie Fraser Luesse is an award-winning writer and a senior travel editor for Southern Living. Specializing in stories about unique pockets of Southern culture, Luesse has published major pieces on the Gulf Coast, the Mississippi Delta, Louisiana's Acadian Prairie, and the Outer Banks of North Carolina. She lives in Alabama.

Valerie Fraser Luesse is an award-winning magazine writer best known for her feature stories and essays in Southern Living, where she is currently a senior travel editor. Her work has been anthologized in the audio collection Southern Voices and in A Glimpse of Heaven, an essay collection featuring works by C. S. Lewis, Randy Alcorn, John Wesley, and others. As a freelance writer and editor, she was the lead writer for Southern Living 50 Years: A Celebration of People, Places, and Culture. Specializing in stories about unique pockets of Southern culture, Luesse has published major pieces on the Gulf Coast, the Mississippi Delta, Louisiana's Acadian Prairie, and the Outer Banks of North Carolina. Her editorial section on Hurricane Katrina recovery in Mississippi and Louisiana won the 2009 Writer of the Year award from the Southeast Tourism Society. Luesse earned her bachelor's degree in English at Auburn University in Auburn, Alabama, and her master's degree in English at Baylor University in Waco, Texas. She grew up in Harpersville, Alabama, a rural community in Shelby County, and now lives in Birmingham.
If the item details above aren’t accurate or complete, we want to know about it. Report incorrect product info.