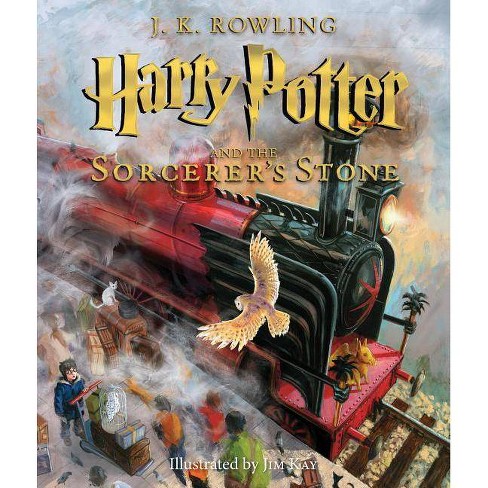 Originally published in a slightly different form in the United Kingdom by Bloomsbury in 1997 under title: Harry Potter and the philosopher's stone.

The beloved first book of the Harry Potter series, now fully illustrated by award-winning artist Jim Kay.For the first time, J.K. Rowling's beloved Harry Potter books will be presented in lavishly illustrated full-color editions. Award-winning artist Jim Kay has created over 100 stunning illustrations, making this deluxe format a perfect gift for a child being introduced to the series and for dedicated fans.Harry Potter has never been the star of a Quidditch team, scoring points while riding a broom far above the ground. He knows no spells, has never helped to hatch a dragon, and has never worn a cloak of invisibility.All he knows is a miserable life with the Dursleys, his horrible aunt and uncle, and their abominable son, Dudley - a great big swollen spoiled bully. Harry's room is a tiny closet at the foot of the stairs, and he hasn't had a birthday party in eleven years.But all that is about to change when a mysterious letter arrives by owl messenger: a letter with an invitation to an incredible place that Harry - and anyone who reads about him - will find unforgettable.

Praise for the original publication of Harry Potter and the Sorcerer's StoneA wonderful first novel. Much like Roald Dahl, J. K. Rowling has a gift for keeping the emotions, fears, and triumphs of her characters on a human scale, even while the supernatural is popping out all over. The book is full of wonderful, sly humor [and] the characters are impressively three-dimensional (occasionally, four-dimensional!) and move along seamlessly through the narrative. Harry Potter and the Sorcerer's Stone is as funny, moving and impressive as the story behind its writing. Like Harry Potter, [J. K. Rowling] has wizardry inside, and has soared beyond her modest Muggle surroundings to achieve something quite special. -- The New York Times Book ReviewA charming, imaginative, magical confection of a novel. . . . A glorious debut, a book of wonderful comic pleasures and dizzying imaginative flights. There is no cause to doubt Rowling's abilities and promise, and every reason to expect great things, truly great things, from her in the future. -- The Boston Sunday GlobeYou don't have to be a wizard or a kid to appreciate the spell cast by Harry Potter. -- USA TodayThe story delights and the writing gives you goosebumps, the good kind. -- Chicago Tribune*Readers are in for a delightful romp with this award-winning debut from a British author who dances in the footsteps of P. L. Travers and Roald Dahl. Rowling leaves the door wide open for a sequel; bedazzled readers will surely clamor for one. -- Publishers Weekly, starred review

J. K. Rowling is the author of the beloved, bestselling, record-breaking Harry Potter series. She started writing the series during a delayed Manchester to London King's Cross train journey, and during the next five years, outlined the plots for each book and began writing the first novel. Harry Potter and the Sorcerer's Stone was published in the United States by Arthur A. Levine Books in 1998, and the series concluded nearly ten years later with Harry Potter and the Deathly Hallows, published in 2007. J. K. Rowling is the recipient of numerous awards and honorary degrees including an OBE for services to children's literature, France's Legion d'Honneur, and the Hans Christian Andersen Literature Award. She supports a wide number of causes through her charitable trust Volant, and is the founder of Lumos, a charity working to transform the lives of disadvantaged children. J. K. Rowling lives in Edinburgh with her husband and three children. Jim Kay won the Kate Greenaway Medal in 2012 for his illustrations in A Monster Calls by Patrick Ness. Jim studied illustration at the University of Westminster and since graduating has worked in the Archives of Tate Britain and the Royal Botanic Gardens at Kew. Jim has produced concept work for television and contributed to a group exhibition at the Victoria and Albert Museum in London. He now lives and works in Northamptonshire, England, with his partner and a rescued greyhound.