Harry Potter and the Goblet of Fire: The Illustrated Edition - by J K Rowling (Hardcover) 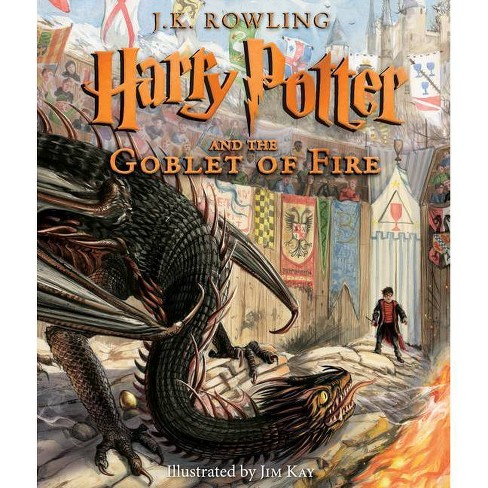 Fourteen-year-old Harry Potter joins the Weasleys at the Quidditch World Cup, then enters his fourth year at Hogwarts Academy where Potter he is mysteriously entered in an unusual contest that challenges been his wizarding skills, friendships and character, amid signs that an old enemy is growing stronger.

The fourth book in the beloved Harry Potter series, now illustrated in glorious full color by award-winning artist Jim Kay. With over 150 illustrations!Harry Potter wants to get away from the pernicious Dursleys and go to the International Quidditch Cup with Hermione, Ron, and the Weasleys. He wants to dream about Cho Chang, his crush (and maybe do more than dream). He wants to find out about the mysterious event involving two other rival schools of magic, and a competition that hasn't happened for a hundred years. He wants to be a normal, fourteen-year-old wizard. Unfortunately for Harry Potter, he's not normal - even by wizarding standards. And in this case, different can be deadly.With over 150 dazzling illustrations from Jim Kay, this new fully illustrated edition of the complete and unabridged text of Harry Potter and the Goblet of Fire is sure to delight fans and first-time readers alike.

Praise for Jim Kay's illustrations: I love seeing Jim Kay's interpretation of Harry Potter's world, and I feel honored and grateful that he continues to lend his talent to it. -- J.K. Rowling

It's all that an old-fashioned book aficionado could wish for . . . Is this, one wonders, the sort of book found at Diagon Alley's Flourish and Blotts or in the Hogwarts library? Kay's illustrations, freshly re-envisioning the story, range from spot images to dramatic double page spreads, all pulsating with color and vitality. This gorgeous volume is sure to please all, from Harry Potter neophytes to longtime fans. -- New York Times Book Review

J.K. Rowling is best known as the author of the seven Harry Potter books, which were first published between 1997 and 2007. The enduringly popular adventures of Harry, Ron, and Hermione have sold over 500 million copies, been translated into over 80 languages, and made into eight blockbuster films, the last of which was released in 2011. Alongside the Harry Potter series, she also wrote three short companion volumes -- Quidditch Through the Ages, Fantastic Beasts and Where to Find Them, and The Tales of Beedle the Bard -- which were published in aid of Comic Relief and Lumos. In 2016, J.K. Rowling collaborated with playwright Jack Thorne and director John Tiffany to resume Harry's story in a stage play, Harry Potter and the Cursed Child, which opened first in London, and is now playing on Broadway and in Melbourne, Australia. In the same year, she made her debut as a screenwriter with the film Fantastic Beasts and Where to Find Them, which was inspired by the original companion volume and features magizoologist Newt Scamander. Her second screenplay, Fantastic Beasts: The Crimes of Grindelwald, was released in cinemas in 2018. J.K. Rowling has also written a stand-alone novel for adults, The Casual Vacancy, and, under the pseudonym Robert Galbraith, is the author of the Strike crime series. She lives in Scotland with her family, and is at her happiest alone in a room, making things up.

Jim Kay won the Kate Greenaway Medal in 2012 for his illustrations in A Monster Calls by Patrick Ness. Jim studied illustration at the University of Westminster and since graduating has worked in the archives of Tate Britain and the Royal Botanic Gardens at Kew. Jim has produced concept work for television and contributed to a group exhibition at the Victoria and Albert Museum in London. He now lives and works in Northamptonshire, England, with his partner and a rescued greyhound.
If the item details above aren’t accurate or complete, we want to know about it. Report incorrect product info.