Not If I Save You First - by Ally Carter (Hardcover) 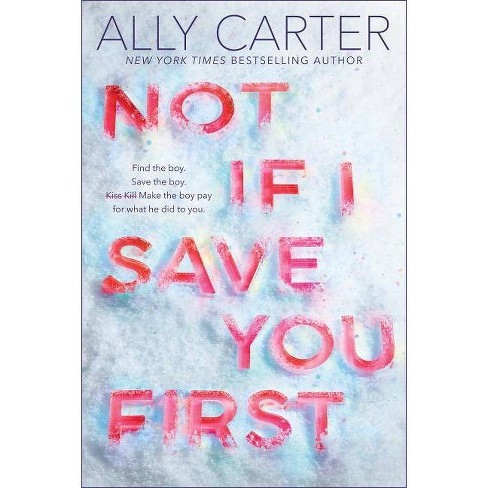 The "New York Times"-bestselling author of the Gallagher Girls series returns with an exciting stand-alone novel, about a girl stranded in the middle of the Alaskan wilderness with the boy who wronged herEand an assassin moving in.

A heart-pounding story about a girl stranded in the middle of the Alaskan wilderness with the boy who wronged her... as an assassin moves in.Maddie thought she and Logan would be friends forever. But when your dad is a Secret Service agent and your best friend is the president's son, sometimes life has other plans. Before she knows it, Maddie's dad is dragging her to a cabin in the middle of the Alaskan wilderness.No phone.No Internet.And not a single word from Logan.Maddie tells herself it's okay. After all, she's the most popular girl for 20 miles in any direction. She has wood to cut and weapons to bedazzle. Her life is full.Until Logan shows up six years later . . .And Maddie wants to kill him. But before that can happen, an assailant appears out of nowhere, knocking Maddie off a cliff and dragging Logan to some unknown fate. Maddie knows she could turn back- and get help. But the weather is turning and the terrain will only get more treacherous, the animals more deadly. Maddie still really wants to kill Logan. But she has to save him first.

Praise for All Fall Down (Embassy Row Book One): A New York Times BestsellerCarter knows how to construct a gripping thriller. -- Publishers WeeklyAction packed and meticulously plotted, All Fall Down keeps readers guessing. -- BooklistWith its intrigue and clever plot twists, this series opener will leave readers hungering for more. -- School Library JournalWill appeal not only to psychological-thriller fans, but to those who want a little glamour, some A-list social politics, and a bit of high school nastiness mixed in with their suspense. -- Kirkus ReviewsGrace is a fighter, and she will stop at nothing to find out what happened to her mother. Readers will love this first book in what promises to be an exciting, thrilling mystery series. -- Voice of Youth AdvocatesAn amazing book. -- The Guardian

Ally Carter is the New York Times bestselling author of the Gallagher Girls, Heist Society, and Embassy Row series. Not If I Save You First is her first standalone novel. Her books have been published all over the world, in over 20 languages. She grew up on a farm in Oklahoma and has never caused an international incident (to her knowledge). You can visit her online at allycarter.com.
If the item details above aren’t accurate or complete, we want to know about it. Report incorrect product info.