Out of Your Mind - by Alan Watts (Paperback) 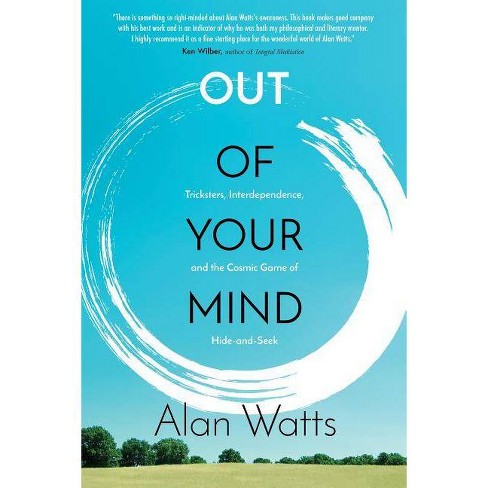 With Out of Your Mind, you are invited to immerse yourself in six of Alan Watts's most compelling explorations on experiencing your life beyond the limits of the intellect and expanding your awareness and appreciation for the cosmic game of hide-and-seek in which we--as aspects of the unfolding universe--are eternally at play.

In order to come to your senses, Alan Watts often said, you sometimes need to go out of your mind. Perhaps more than any other teacher in the West, this celebrated author, former Anglican priest, and self-described spiritual entertainer was responsible for igniting the passion of countless wisdom seekers to the spiritual and philosophical delights of India, China, and Japan.

With Out of Your Mind, you are invited to immerse yourself in six of this legendary thinker's most engaging teachings on how to break through the limits of the rational mind and expand your awareness and appreciation for the great game unfolding all around us. Distilled from Alan Watts's pinnacle lectures, Out of Your Mind brings you an inspiring new resource that captures the true scope of this brilliant teacher in action. For those both new and familiar with Watts, this book invites us to delve into his favorite pathways out of the trap of conventional awareness, including: - The art of the controlled accident--what happens when you stop taking your life so seriously and start enjoying it with complete sincerity - How we come to believe the myth of myself--that we are skin-encapsulated egos separate from the world around us--and how to transcend that illusion - Why we must fully embrace chaos and the void to find our deepest purpose - Unconventional and refreshing insights into the deeper principles of Buddhism, Hinduism, Western philosophy, Christianity, and much more

"Alan Watts was ready for the Sixties, and the Sixties welcomed Alan Watts with open arms. He described himself as a spiritual entertainer but there was nothing frivolous about the Eastern perspective that he was sharing with Westerners. When he spoke of consciousness, he was talking about the subtle levels of awareness that most Westerners had never noticed. When he spoke about the Web, he meant the The Web of Life not the internet. When he talked about Emptiness, he told us that it was a good thing. All of it was earth-rattling for most Westerners at the time. Now his son, in tandem with Sounds True, has transformed a series of his recorded lectures (available on CD as Out of Your Mind) into a new book which sums up much of what took America by storm when Alan Watts took center stage over fifty years ago. In today's e-world, he would be called a disruptor. In the Sixties, he was a breath of fresh air, opening doors to the rest of the world which had for too long been shut and locked. Let your customers know that some of what they find in this book will be familiar. That is the best testimony to the power of his legacy. Many of the ideas they find in the book, however, will be new to them and extraordinarily relevant to today's thinking. Reading the book, I sometimes felt as if the words had just crystallized on the page, distilled by the current merging of science and spirituality. I had to keep reminding myself how long ago they were written. Mark Watts honors his father with this well-organized, clear, and insightful record of his father's teachings." --Retailing Insight, Anna Jedrziewski

"It's not too far off to say that my interest in all things 'East and West' got its start with Alan Watts. I discovered his books at a tender age, basically in my mid-teens, and proceeded to read everything he had ever written. In fact, as I began to write myself, I remembered reading that they used to teach writing by having students copy out--word for word--large sections of the works of great writers. And so I proceeded to copy out--literally--ten of Alan's books, all of them, word by word. When I'm told to this day that I'm a very clear writer on very difficult topics, I always give Watts credit for this. And while over the years I have come less to believe in all the little details of Alan's works, I still find something absolutely right on about his general--I suppose we could call it 'attitude.' There is just something so right-minded about his overall awareness that I still love reading and listening to anything by him. Out of Your Mind certainly qualifies, and is a fine indicator of why Watts was both my philosophical and literary mentor. This book makes fine company with his best, and I can highly recommend it as a fine starting place to the wonderful world of Alan Watts." --Ken Wilber, author of Integral Meditation

For spiritual seekers of many generations, Alan Watts earned a reputation as one of the most accessible--and entertaining--interpreters of Eastern philosophy in the West. Beginning at age 16, when he wrote an article for the journal of the Buddhist Lodge in London, Watts would develop an audience of millions who were enriched through his books, recordings, radio broadcasts, and public talks. In all, Alan Watts wrote more than 25 books, including such classics as The Book: On the Taboo Against Knowing Who You Are and This Is It: and Other Essays on Zen and Spiritual Experience.
If the item details above aren’t accurate or complete, we want to know about it. Report incorrect product info.