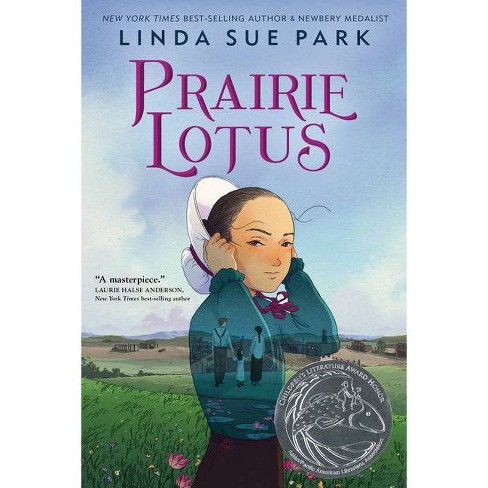 In this compelling, emotionally engaging novel set in 1880, a half-Chinese girl and her white father try to make a home in Dakota Territory, in the face of racism and resistance.

Prairie Lotus is a powerful, touching, multilayered book about a girl determined to fit in and realize her dreams: getting an education, becoming a dressmaker in her father's shop, and making at least one friend. Acclaimed, award-winning author Linda Sue Park has placed a young half-Asian girl, Hanna, in a small town in America's heartland, in 1880. Hanna's adjustment to her new surroundings, which primarily means negotiating the townspeople's almost unanimous prejudice against Asians, is at the heart of the story. Narrated by Hanna, the novel has poignant moments yet sparkles with humor, introducing a captivating heroine whose wry, observant voice will resonate with readers. Afterword.

"Captivating." - The New York Times ★ "Fans of the Little House books will find many of the small satisfactions of Laura's stories...here in abundance. Park brings new depth to these well-trodden tales, though, as she renders visible both the xenophobia of the town's white residents, which ranges in expression from microaggressions to full-out assault, and Hanna's fight to overcome it with empathy and dignity.... Remarkable."--Kirkus, STARRED review ★ "Strongly reminiscent of Laura Ingalls Wilder's novels in its evocative, detailed depictions of daily frontier life....[Hanna's] painful experiences, including microaggressions, exclusion, and assault, feel true to the time and place, and Park respectfully renders Hanna's interactions with Ihanktonwan women. An absorbing, accessible introduction to a troubled chapter of American history."--Publishers Weekly, STARRED review ★ "In her latest middle-grade historical-fiction masterpiece, Park conjures the resourceful and industrious spirit of America's westward expansion without ignoring the ugly veneer of racism....An incredible and much-needed addition to the historical-fiction canon."--Booklist, STARRED review ★ "Park's novel is clearly in conversation with [Laura Ingalls Wilder's Little House books], from Hanna's friendlier interactions with, and more thoughtful views about, members of the Ihanktonwan tribe to racist attitudes among LaForge's townspeople, who object to Hanna's presence in the school and blame her after a local man assaults her. But this novel stands on its own, with a vividly drawn protagonist in self-reliant Hanna." --The Horn Book Magazine, STARRED review ★ "A sometimes uncomfortable yet triumphant story from the world of 'Little House on the Prairie' told through a marginalized perspective; this is a must-read for middle grades and beyond." --School Library Journal, STARRED review ★ "Narrated by a smart, clear-sighted and tremendously likable protagonist, Prairie Lotus is a richly layered work of historical fiction set in a landscape that will be familiar to Little House on the Prairie readers....As one can expect from Park, Prairie Lotus's gorgeous, fluid storytelling carries the reader along swiftly to a satisfying conclusion." --Shelf Awareness, STARRED review "In this accessible exploration of a biracial teen's prairie year, Park invites fellow Wilder fans to consider the struggle for respect and independence roiling beneath the iconic sunbonnet." --The Bulletin of the Center for Children's Books

Linda Sue Park is the author of the Newbery Medal book A Single Shard and bestseller A Long Walk to Water. She has also written several acclaimed picture books, fiction and nonfiction, and is a founding member of We Need Diverse Books. She lives in western New York with her family. Visit her online at lindasuepark.com and on Twitter @LindaSuePark.
If the item details above aren’t accurate or complete, we want to know about it. Report incorrect product info.