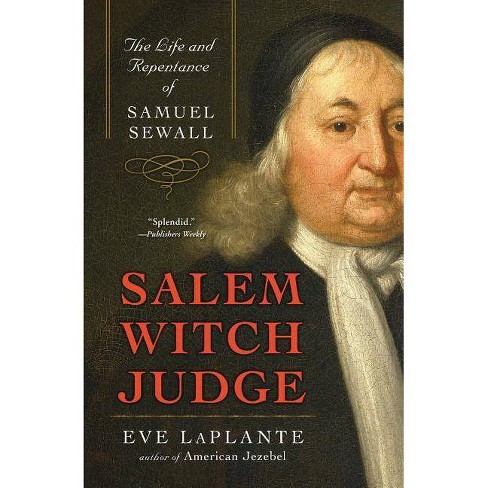 In 1692, twenty people were sent to their deaths in Salem, Massachusetts, convicted of the charge of witchcraft. A Puritan named Samuel Sewell was one of those who condemned the innocent victims.

Sewell might have remained a footnote in history, had he not publicly repented his actions; he was the only Salem witch judge to do so. Sewell went on to become a progressive voice in New England, speaking out against slavery, in favor of the rights and education of Native Americans, and arguing for the equality of women and men. In Salem Witch Judge, Eve LaPlante, acclaimed biographer and descendant of Sewall, paints a portrait of a man who overcame his intolerance to represent the best of the American spirit. Eve LaPlante, a direct descendant of Samuel Sewall (6th-great-granddaughter), has degrees from Princeton and Harvard. She has written for The Atlantic, New York Times, Ladies' Home Journal, Gourmet, and Boston Magazine. Her previous books, Seized and American Jezebel (a biography of Anne Hutchinson, LaPlante's 12th-generation ancestor), were published to critical acclaim. She lives with her husband and four children in Massachusetts. "LaPlante's touching biography of Samuel Sewall, who condemned 20 people to death on witchcraft charges, seems hauntingly timely. Beneath the sensational title is a figure more familiar than we realize. Salem Witch Judge upends popular stereotypes about Puritans; it also reminds us how quickly the conventional wisdom can shift, forcing even the powerful to move. In the wake of crisis and fear, at least one leader's admission of failure actually helped him expand the circle of grace." - New York Times Book Review--Christian Science Monitor
If the item details above aren’t accurate or complete, we want to know about it. Report incorrect product info.