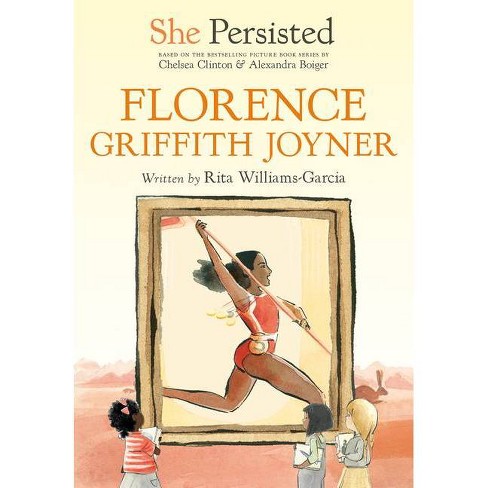 Inspired by the #1 New York Times bestseller She Persisted by Chelsea Clinton and Alexandra Boiger comes a chapter book series about women who stood up, spoke up and rose up against the odds! Considered the fastest woman of all time, Florence Griffith Joyner, also known as Flo-Jo, set two world records in 1988 that still stand today. But getting there wasn't easy, and Flo-Jo had to overcome many challenges along the way. In this chapter book biography by award-winning author Rita Williams-Garcia, readers learn about the amazing life of Florence Griffith Joyner--and how she persisted. Complete with an introduction from Chelsea Clinton!

Rita Williams-Garcia (rita-williamsgarcia.squarespace.com) is the celebrated author of novels for young adults and middle grade readers. Her most recent novel, Clayton Byrd Goes Underground, won the 2018 NAACP Image Award for Literature for Youth/Teens and was a 2017 National Book Award Finalist. Williams-Garcia is most known for her Coretta Scott King Author Award-winning Gaither Sisters trilogy that begins with One Crazy Summer, recipient of the Newbery Honor and the Scott O'Dell Prize for Historical Fiction. She is a three-time National Book Award Finalist. She holds a BA in liberal arts from Hofstra University and an MA in English from Queens College at CUNY. She lives in Queens with her husband. You can follow her on Twitter @Onecrazyrita.