Something Torn and New - by Ngugi Wa Thiong'o (Paperback) 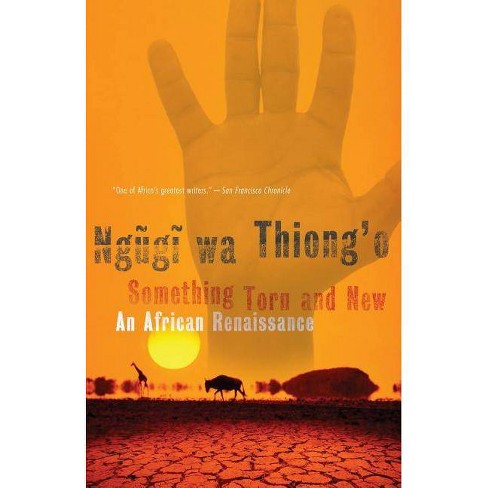 One of Africa's greatest writers ("San Francisco Chronicle") makes an impassioned plea for the resurrection of African language--and African culture itself.

Novelist Ngugi wa Thiong'o has been a force in African literature for decades: Since the 1970s, when he gave up the English language to commit himself to writing in African languages, his foremost concern has been the critical importance of language to culture. In Something Torn and New, Ngugi explores Africa's historical, economic, and cultural fragmentation by slavery, colonialism, and globalization. Throughout this tragic history, a constant and irrepressible force was Europhonism: the replacement of native names, languages, and identities with European ones. The result was the dismemberment of African memory. Seeking to remember language in order to revitalize it, Ngugi's quest is for wholeness. Wide-ranging, erudite, and hopeful, Something Torn and New is a cri de coeur to save Africa's cultural future.

Ngugi wa Thiong'o, currently Distinguished Professor of English and Comparative Literature and Director of the International Center for Writing and Translation at the University of California, Irvine, was born in Kenya in 1938. After penning Petals of Blood in 1977, a novel sharply critical of life in neo-colonial Kenya, he was arrested and imprisoned without charge for a year. Vanity Fair has called him the scourge of African dictators and warlords and the San Diego Union-Tribune praised him as a writer whose output feels essential for those hoping to understand contemporary Africa. He lives in Irvine, California.
If the item details above aren’t accurate or complete, we want to know about it. Report incorrect product info.