South of the Border, West of the Sun - (Vintage International) by Haruki Murakami (Paperback) 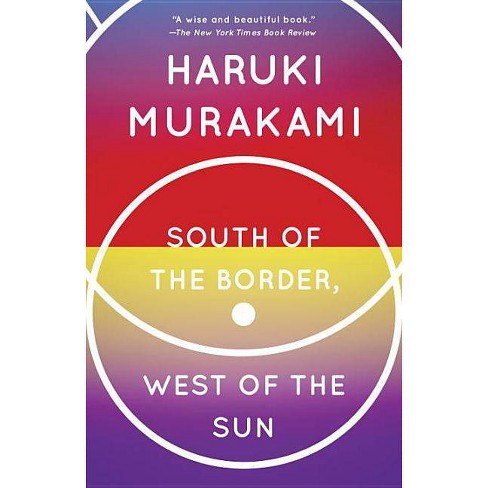 In post-war Japan, a middle-aged family man and owner of two jazz clubs is dogged by a nagging sense of inauthenticity about his success and a boyhood memory of a wise, lonely girl. When the beautiful Shimamoto shows up one rainy night, the fault lines of doubt in Hajime's quotidian existence begin to give way.

South of the Border, West of the Sun is the beguiling story of a past rekindled, and one of Haruki Murakami's most touching novels. Hajime has arrived at middle age with a loving family and an enviable career, yet he feels incomplete. When a childhood friend, now a beautiful woman, shows up with a secret from which she is unable to escape, the fault lines of doubt in Hajime's quotidian existence begin to give way. Rich, mysterious, and quietly dazzling, in South of the Border, West of the Sun the simple arc of one man's life becomes the exquisite literary terrain of Murakami's remarkable genius.

Born in 1951 in an affluent Tokyo suburb, Hajime -- beginning in Japanese -- has arrived at middle age wanting for almost nothing. The postwar years have brought him a fine marriage, two daughters, and an enviable career as the proprietor of two jazz clubs. Yet a nagging sense of inauthenticity about his success threatens Hajime's happiness. And a boyhood memory of a wise, lonely girl named Shimamoto clouds his heart.

In South of the Border, West of the Sun, the simple arc of a man's life -- with its attendant rhythms of success and disappointment -- becomes the exquisite literary tableau of Haruki Murakami's most haunting work. When Shimamoto shows up one rainy night, now a breathtaking beauty with a secret from which she is unable to escape, the fault lines of doubt in Hajime's quotidian existence begin to give way. And the details of stolen moments past and present -- a Nat King Cole melody, a face pressed against a window, a handful of ashes drifting downriver to the sea -- threaten to undo him completely. Rich, mysterious, quietly dazzling, South of the Border, West of the Sun is Haruki Murakami's wisest and most compelling work.

"A wise and beautiful book." -The New York Times Book Review "A probing meditation on human fragility, the grip of obsession, and the impenetrable, erotically charged enigma that is the other." -The New York Times "Brilliant. . . . A mesmerizing new example of Murakami's deeply original fiction." -The Baltimore Sun "Lovely, deceptively simple. . . . A novel of existential romance." -San Francisco Chronicle "His most deeply moving novel." -The Boston Globe "Mesmerizing. . . . This is a harrowing, a disturbing, a hauntingly brilliant tale." -The Baltimore Sun "A fine, almost delicate book about what is unfathomable about us." -The Philadelphia Inquirer "Portrayed in a fluid language that veers from the vernacular . . . to the surprisingly poetic." -San Francisco Examiner & Chronicle "Haunting and natural. . . . South of the Border, West of the Sun so smoothly shifts the reader from mundane concerns into latent madness as to challenge one's faith in the material world . . . contains passages that are among his finest." -The New York Observer "Haruki Murakami applies his patented Japanese magic realism-minimalist, smooth and transcendently odd-to a charming tale of childhood love lost." -New York

Haruki Murakami lives in Oiso, Japan, just outside of Tokyo.
If the item details above aren’t accurate or complete, we want to know about it. Report incorrect product info.