Tales from the Loop - by Simon Stålenhag (Hardcover) 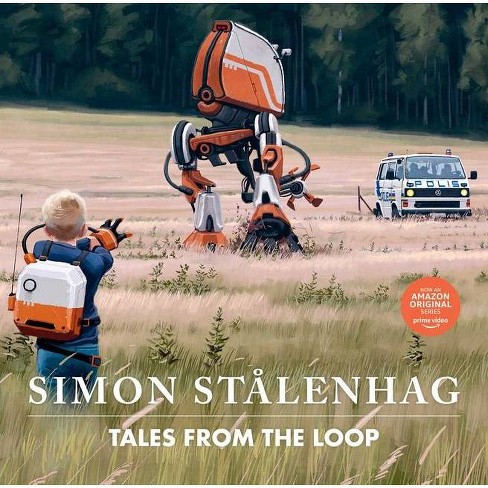 "Originally published in Sweden in 2016 by Fria Ligan AB."--Colophon.con

The basis for the new Amazon Prime Original Series! Perfect for fans of E.T. and Stranger Things--the first narrative artbook from acclaimed author and artist Simon Stålenhag about a fictionalized suburban town in the 1980s inhabited by fantastic machines and strange, imaginative beasts. In 1954, the Swedish government ordered the construction of the world's largest particle accelerator. The facility was complete in 1969, located deep below the pastoral countryside of Mälaröarna. The local population called this marvel of technology The Loop. These are its strange tales. From the same author who wrote the imaginative artbook The Electric State, this "haunting," (The Verge) "sophisticated sci-fi" (The Nerdist) follows the bizarre stories from otherworldly creatures and is a page-turner you won't be able to put down.

"[Simon Stålenhag's] stories crawl into my brain and mess with my memory of history, time, and place. His art (photorealistic, washed out, laced in neon or icicles, nostalgic and futuristic both at the same time) gets into my eyes and stays there. . . . If you're anything like me, you'll take those images to bed with you for a long time and dream of Stålenhag's America -- lost to sand, to drought, to war, to loneliness, and stalked always by the low, distant rumble of something terrible rising out of the earth and coming for you."--NPR Books on The Electric State

"[The] mix of science fiction and real world pop-culture nostalgia is instantly compelling, but there are layers to The Electric State that take the story beyond surface value. . . . In a way, it is an extremely American story, bringing together themes like the intersection of war and technology; fire-and-brimstone religion and its effect on LGBT youth; families separated by great physical distance while still being a part of the same country."--Los Angeles Times on The Electric State

"A haunting illustrated novel. . . . Readers of bleak, emotionally rich dystopian science fiction will be fascinated with the way Stålenhag doles out details--all the way to the open-ended, heartbreaking conclusion."--Booklist, starred review on The Electric State

"A jaw-dropping science fiction artbook . . . This quiet, sad adventure is an excellent and visually stunning addition to any graphic novel, art, or science fiction collection."--Publishers Weekly, starred review on The Electric State

"An awe-inspiring vision of a species committing suicide, perhaps to be reborn as something new. . . The Electric State is a striking and strangely compelling work of science fiction gothic. Providing a series of snapshots of an alternate Earth of yesteryear, it tells the story of how that world ended."--New York Journal of Books on The Electric State

"One part art-book, one part picture-book--the mundanity of everyday relationships play out alongside science fiction imagery that is as beautiful as it is unsettling."--Waypoint on The Electric State

"Gorgeously creepy and strangely human."-- "NPR Books on Things from the Flood"

"Simon Stålenhag did not forget the robots. More to the point, Simon Stålenhag can't forget the robots, because in his remarkable, beautiful new art book, Tales From The Loop, he has embedded them into our collective past, offering a vision of an alt-history Sweden in the late 80's and early 90's where they clack through suburban streets, lurk in the backyard trees, or lie, still and cold, abandoned in snowy fields... If you've got a geek in your family who needs a Christmas present, this should be it. They'll love you forever. If you've got a young nerd in need of corruption ? a kid who'd benefit from having their reality shaken and their head filled with impossible things ? this'll do the trick because, Tales has the magic. It's got the robots, the weirdness, the dinosaurs."-- "NPR.org"

"Stålenhag was far and away my favorite sci-fi artist of 2015, and Tales From the Loop will show you why. His universe is a dystopia you wouldn't mind exploring, one that oppresses you with mystery and beauty rather than drab soldiers or vacuous 'you have this emotion, therefore you belong in this group' regimes. The Loop is sophisticated sci-fi buried under snowy Swedish dirt. And I can't wait to dig deeper."-- "Nerdist"
If the item details above aren’t accurate or complete, we want to know about it. Report incorrect product info.