Talking to Strangers - by Malcolm Gladwell 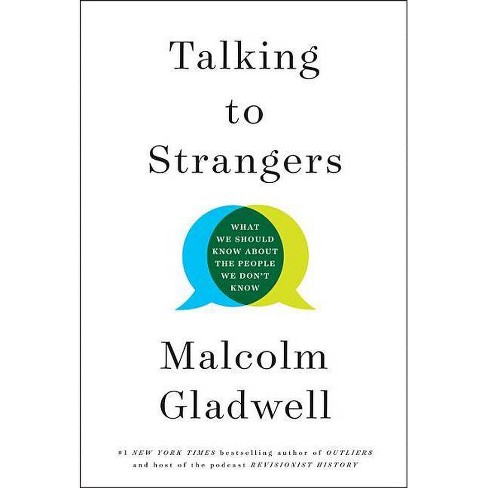 The host of the podcast Revisionist History and #1 bestselling author of The Tipping Point, Blink, Outliers, David and Goliath, and What the Dog Saw, offers a powerful examination of people's interactions with strangers--and why they often go wrong.rong.

Malcolm Gladwell, host of the podcast Revisionist History and author of the #1 New York Times bestseller Outliers, offers a powerful examination of our interactions with strangers--and why they often go wrong. A Best Book of the Year: The Financial Times, Bloomberg, Chicago Tribune, and Detroit Free Press How did Fidel Castro fool the CIA for a generation? Why did Neville Chamberlain think he could trust Adolf Hitler? Why are campus sexual assaults on the rise? Do television sitcoms teach us something about the way we relate to one another that isn't true? Talking to Strangers is a classically Gladwellian intellectual adventure, a challenging and controversial excursion through history, psychology, and scandals taken straight from the news. He revisits the deceptions of Bernie Madoff, the trial of Amanda Knox, the suicide of Sylvia Plath, the Jerry Sandusky pedophilia scandal at Penn State University, and the death of Sandra Bland--throwing our understanding of these and other stories into doubt. Something is very wrong, Gladwell argues, with the tools and strategies we use to make sense of people we don't know. And because we don't know how to talk to strangers, we are inviting conflict and misunderstanding in ways that have a profound effect on our lives and our world. In his first book since his #1 bestseller David and Goliath, Malcolm Gladwell has written a gripping guidebook for troubled times.

Talking to Strangers is a must-read...I love this book... Reading it will actually change not just how you see strangers, but how you look at yourself, the news--the world...Reading this book changed me.--Oprah Winfrey, O, The Oprah Magazine Another Gladwell tour de force...intellectually stimulating...Readers expecting another everything-you-think-you-know-is-wrong page-turner will not be disappointed.--Kirkus Reviews (starred review) As always, with his narrative gift and eye for the telling detail, Gladwell peppers his work with unforgettable facts... He has immense gifts--a probing, original, questioning mind, an ability to dig up information others haven't considered and tie it to a broader point. He has a narrative skill nonpareil.--Stephen Galloway, Hollywood Reporter Both fascinating and topical...A thoughtful treatise...Gladwell writes in his signature colorful, fluid, and accessible prose.--Publishers Weekly Engaging...Mr. Gladwell [presents] a mountain of quirky anecdotes and interesting research about our blunders with strangers, and why we make them...It's fascinating to peek at these incidents through Mr. Gladwell's psychological lens.--Leigh Anne Focareta, Pittsburgh Post-Gazette Gladwell has again delivered a compelling, conversation-starting read...At a time when the world feels intractably polarized, a book examining the varying ways we misinterpret or fail to communicate with one another could not feel more necessary...With a mix of reporting, research and a deft narrative hand, Gladwell illuminates these examples with the page-turning urgency of a paperback thriller.--Chris Barton, Los Angeles Times Gladwell interviews brilliant people, generates powerful insights, writes like an angel, and has earned a massive and admiring audience. He has a keen eye and a witty flair and he's one of the best observationalists of a generation. Gladwell is a big-picture thinker who helps us make sense of the human condition.--Bob Brisco, WebMD Magazine Gladwell uses compelling real-world examples to show the how and why behind our interactions with folks we're trying to understand.
--Rhett Power, Forbes Gladwell's case studies are thrilling...Chock-full of gripping anecdotes from the recent and forgotten past. He uses these riveting stories to offer up bite-size observations about how we engage with strangers.--Maggie Taft, Booklist Inspiring and motivating...Gladwell is a wunderkind and a saint...He takes on racial division, incompatible perspectives, and emotional dissonance without ever sounding preaching or proud. The stories make you think.--John Brandon, Daily Beast Mr. Gladwell's towering success rests on the moment when the skeptic starts to think that maybe we're wrong about everything and maybe, just maybe, this Gladwell guy is onto something...Talking to Strangers is weightier than his previous titles.--Amy Chozick, New York Times Powerful advice on truly getting to know others...Gladwell brilliantly argues that we should stop assuming, realize no one's transparent and understand that behavior is tied to unseen circumstances.--People, Book of the Week Superb writing. Masterful structure.--Pilita Clark, Financial Times (UK)

Malcolm Gladwell is the author of six New York Times bestsellers, including Talking to Strangers, David and Goliath, Outliers, Blink, and The Tipping Point. He is also the co-founder of Pushkin Industries, an audio content company that produces the podcasts Revisionist History, which reconsiders things both overlooked and misunderstood, and Broken Record, where he, Rick Rubin, and Bruce Headlam interview musicians across a wide range of genres. Gladwell has been included in the TIME 100 Most Influential People list and touted as one of Foreign Policy's Top Global Thinkers.
New York Times Best Seller
Book that has been on the New York Times Best Sellers list
If the item details above aren’t accurate or complete, we want to know about it.

The Bomber Mafia - by Malcolm Gladwell

What the Dog Saw (Reprint) (Paperback) by Malcolm Gladwell

The Bomber Mafia - by Malcolm Gladwell

David and Goliath - by Malcolm Gladwell

What the Dog Saw (Reprint) (Paperback) by Malcolm Gladwell

5 out of 5 stars
lisasi1721 - 2 years ago, Verified purchaser
Everyone should read this book!
3 guests found this review helpful. Did you?

5 out of 5 stars
Would recommend
Susan B - 3 years ago
Gladwell used multiple anecdotes from transcripts and interviews to bring “truth-default theory” to life in "Talking to Strangers." He worked through this theory as a way to explain the position most people default to when talking with strangers. Truth-default theory originated with Timothy R. Levine, a distinguished professor and chair of communication studies at the University of Alabama Birmingham. Gladwell explained that when talking to others, we accept they’re telling the truth. We look at two scenarios, and we go with the more likely answer. Something has to push us over the threshold for us to not default to truth. “To assume the best about another is the trait that has created modern society,” Gladwell said. “Those occasions when our trusting nature gets violated are tragic; but…to abandon trust as a defense against predation and deception – is worse” (342-343). Gladwell opened and closed the book with the case of Sandra Bland, pulled over for failing to use a signal on July 10, 2015 in Prairie View, Texas. That minor traffic violation led to a troubling exchange between her and state trooper Brian Encinia that led to her arrest. I didn’t remember this story so this was a fresh telling for me. He ended with the Bland case after a journey through other stories where he further developed “default-to-truth theory” and moved on to what I’ll call companions to default-to-truth for how we make sense of the stranger. He moved from a look at Cortez vs. Montezuma II to Fidel Castro & Cuban spies and the CIA, UK ambassadors and Adolf Hitler, finally turning his attention to stories from today’s headlines. He talked about the controversial cases of Jerry Sandusky, Larry Nassar, and Bernard Madoff, as well as Amanda Knox, and Brock Turner. A chapter labeled “Sylvia Plath” caught my eye. She and Anne Sexton were included. I couldn’t wait to see why. I kept thinking, “I feel like singing the Sesame Street song, “One of these things is not like the other.” Some of these stories were not like the others and didn’t appear to belong. They did connect eventually, and that’s what made the book a stimulating mental treat. I thought Gladwell triumphed as a storyteller. I talked about this book often as I read, so riveted was I by these stories and the new insights I gained. I told people he’s like Paul Harvey in that he gave you “the rest of the story” once he developed his argument further. So many of his cases invited further study. He’s restored my faith in journalism. I could tell he thoroughly researched the cases presented and worked to give back an unbiased re-telling. He conducted interviews and used transcripts to bring life to the stories. (Yes, that meant I did see curse words.) Included were copious notes in the back. And he even gave an email address in the notes section for readers who notice an error they want to dispute. I felt better informed about past and present cases, and I appreciated how Gladwell showed compassion and empathy for people the media had tried in the court of public opinion. When I finished this book I thought: “Give this guy a Pulitzer!” Such a departure from my usual nonfiction fare. I do like to take deep dives into subjects. I love the rush of the “A-ha moment.” I could easily see someone taking Gladwell’s ideas and applying them to literature to make sense of misunderstood characters, like Frankenstein’s monster in Mary Shelley’s “Frankenstein” or Heathcliff in Emily Bronte’s “Wuthering Heights.” The more I read, the more I saw how often I have let social media and news media influence what I believe about some of the high-profile cases covered again in the book. And I think Gladwell accomplished his goal because I reflected often on each case presented. Not giving away the thrill of discovery, I will say they’re ones we should never forget.
34 guests found this review helpful. Did you?

5 out of 5 stars
Would recommend
A - 3 years ago, Verified purchaser
Loved this thought provoking book so much! I have sent it as gifts to several of my friends and loved ones.
5 guests found this review helpful. Did you?