The Devil All the Time - by Donald Ray Pollock (Paperback) 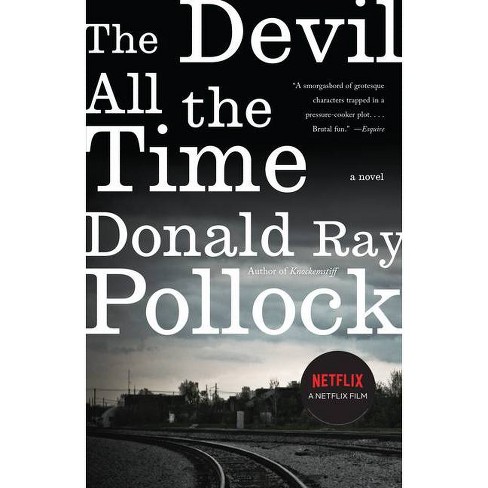 From the acclaimed author of "Knockemstiff" comes a dark and riveting vision of America that delivers literary excitement in the highest degree. Set in rural southern Ohio and West Virginia, this book follows a cast of compelling and bizarre characters from the end of World War II to the 1960s.

A dark and riveting vision of 1960s America that delivers literary excitement in the highest degree. In The Devil All the Time, Donald Ray Pollock has written a novel that marries the twisted intensity of Oliver Stone's Natural Born Killers with the religious and Gothic over­tones of Flannery O'Connor at her most haunting. Set in rural southern Ohio and West Virginia, The Devil All the Time follows a cast of compelling and bizarre characters from the end of World War II to the 1960s. There's Willard Russell, tormented veteran of the carnage in the South Pacific, who can't save his beautiful wife, Charlotte, from an agonizing death by cancer no matter how much sacrifi­cial blood he pours on his "prayer log." There's Carl and Sandy Henderson, a husband-and-wife team of serial kill­ers, who troll America's highways searching for suitable models to photograph and exterminate. There's the spider-handling preacher Roy and his crippled virtuoso-guitar-playing sidekick, Theodore, running from the law. And caught in the middle of all this is Arvin Eugene Russell, Willard and Charlotte's orphaned son, who grows up to be a good but also violent man in his own right. Donald Ray Pollock braids his plotlines into a taut narrative that will leave readers astonished and deeply moved. With his first novel, he proves himself a master storyteller in the grittiest and most uncompromising American grain.

Brutally creative. . . . Pollock knows how to dunk readers into a scene and when to pull them out gasping.--The New York Times Book Review

Should cement Pollock's reputation as a significant voice in American fiction. --Los Angeles Times Will have you on the edge of your seat. --Christian Science Monitor

"A systematic cataloguing of the horror and hypocrisy that festers in the dark shadow of the American dream." --The Portland Mercury "You may be repelled, you may be shocked, you will almost certainly be horrified, but you will read every last word." --The Washington Post

Reads as if the love child of O'Connor and Faulkner was captured by Cormac McCarthy, kept in a cage out back and forced to consume nothing but onion rings, Oxycontin and Terrence Malick's Badlands.--The Oregonian

[Pollock] doesn't get a word wrong in this super-edgy American Gothic stunner.--Elle Features a bleak and often nightmarish vision of the decades following World War II, a world where redemption, on the rare occasions when it does come to town, rides shotgun with soul-scarring consequences.--The Onion, A.V. Club Mr. Pollock's new novel is, if anything, even darker than the Knockemstiff, and its violence and religious preoccupations venture into Flannery O'Connor territory.--The New York Times

"Donald Ray Pollock's engaging and proudly violent first novel...suggests a new category of fiction--grindhouse literary. Subtle characterization: check. Well-crafted sentences: check. Enthusiastic amounts of murder and mayhem: check, check."--The Daily Beast Beneath the gothic horror is an Old Testament sense of a moral order in the universe, even if the restoration of that order itself requires violence.--The Columbus Dispatch

A smorgasbord of grotesque characters trapped in a pressure-cooker plot. . . . Brutal fun.--Esquire

For a first novel so soaked in stale sweat and bright fresh blood, Pollock's sweat is well-earned, and his blood is wise.--Philadelphia Citypaper

A gallery of reprobates and religious fanatics... are multidimensional, flawed human beings.--Dayton Daily News [The Devil All the Time is] a world unto its own, a world vividly and powerfully brought to life by a literary stylist who packs a punch as deadly as pulp-fiction master Jim Thompson and as evocative and morally rigorous as Russell Banks.--Philadelphia Inquirer

"Stunning . . . . One wild story . . . gives us sex, murder, mayhem and some of the most bizarre characters in fiction today."--Richmond Times-Dispatch

DONALD RAY POLLOCK is the author of the novel The Devil All the Time and the story collection Knockemstiff, recipient of the 2009 PEN/Robert W. Bingham Fellowship. He worked as a laborer at the Mead Paper Mill in Chillicothe, Ohio, from 1973 to 2005. He holds an MFA from Ohio State University.
If the item details above aren’t accurate or complete, we want to know about it. Report incorrect product info.