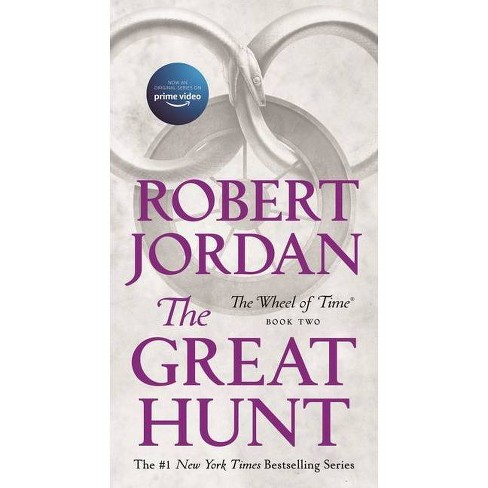 In The Great Hunt, the second novel in Robert Jordan's #1 New York Times bestselling epic fantasy series, The Wheel of Time, Rand al'Thor and his companions set out to retrieve a powerful magical artifact from The Dark One's Shadowspawn.

In The Great Hunt, the second novel in Robert Jordan's #1 New York Times bestselling epic fantasy series, The Wheel of Time(R), Rand al'Thor and his companions set out to retrieve a powerful magical artifact from The Dark One's Shadowspawn. For centuries, gleemen have told the tales of The Great Hunt of the Horn. So many tales about each of the Hunters, and so many Hunters to tell of... Now the Horn itself is found: the Horn of Valere long thought only legend, the Horn which will raise the dead heroes of the ages. And it is stolen. In pursuit of the thieves, Rand al'Thor is determined to keep the Horn out of the grasp of The Dark One. But he has also learned that he is The Dragon Reborn--the Champion of Light destined to stand against the Shadow time and again. It is a duty and a destiny that requires Rand to uncover and master magical capabilities he never imagined he possessed. Since its debut in 1990, The Wheel of Time(R) has captivated millions of readers around the globe with its scope, originality, and compelling characters. The last six books in series were all instant #1 New York Times bestsellers, and The Eye of the World was named one of America's best-loved novels by PBS's The Great American Read. The Wheel of Time(R)
New Spring: The Novel
#1 The Eye of the World
#2 The Great Hunt
#3 The Dragon Reborn
#4 The Shadow Rising
#5 The Fires of Heaven
#6 Lord of Chaos
#7 A Crown of Swords
#8 The Path of Daggers
#9 Winter's Heart
#10 Crossroads of Twilight
#11 Knife of Dreams By Robert Jordan and Brandon Sanderson
#12 The Gathering Storm
#13 Towers of Midnight
#14 A Memory of Light By Robert Jordan and Teresa Patterson
The World of Robert Jordan's The Wheel of Time By Robert Jordan, Harriet McDougal, Alan Romanczuk, and Maria Simons
The Wheel of Time Companion By Robert Jordan and Amy Romanczuk
Patterns of the Wheel: Coloring Art Based on Robert Jordan's The Wheel of Time

The Shadow Rising - (Wheel of Time) by Robert Jordan (Hardcover)

The Dragon Reborn - (Wheel of Time) by Robert Jordan (Hardcover)

Lord of Chaos - (Wheel of Time) by Robert Jordan (Hardcover)

The Great Hunt - (Wheel of Time) by Robert Jordan (Hardcover)

We're Going on a Lion Hunt - by Margery Cuyler (Paperback)