The Mask of Mirrors - (Rook & Rose) by M A Carrick (Paperback) 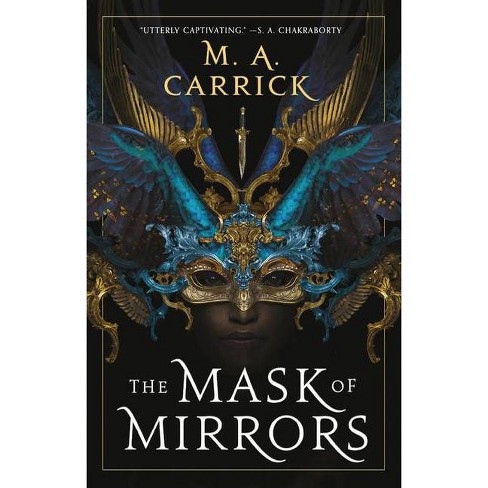 Renata Viraudax is a con artist who has come to the sparkling city of Nadezra--the city of dreams--with one goal: to trick her way into a noble house and secure her fortune and her sister's future. But as she's drawn into the elite world of House Traementis, she realizes her masquerade is just one of many surrounding her.nding her.

"Lush, engrossing, and full of mystery and dark magic," The Mask of Mirrors is the unmissable start to the Rook & Rose trilogy, a dazzling fantasy adventure by Marie Brennan and Alyc Helms, writing together as M. A. Carrick. (BookPage) FORTUNE FAVORS THE BOLD. MAGIC FAVORS THE LIARS. Ren is a liar and a thief, a pattern-reader and a daughter of no clan. Raised in the slums of Nadezra, she fled that world to save her sister. Now, she has returned with one goal: to trick her way into a noble house, securing her fortune and her sister's future. But in the city of dreams, her masquerade is just one of many. Enigmatic crime lord Derossi Vargo, stony captain of the guard Grey Serrado, dashing heir Leato Traementis, and the legendary vigilante known as the Rook all have secrets that could unravel her own. And as corrupt nightmare magic begins to weave its way through the city of dreams, the poisonous feuds of its aristocrats and the shadowy dangers of its impoverished underbelly become tangled--with Ren at their heart. Praise for the Rook & Rose trilogy: "Immersive...a feast to savor slowly." --BuzzFeed "For those who like their revenge plots served with the intrigue of The Goblin Emperor, the colonial conflict of The City of Brass, the panache of Swordspoint, and the richly detailed settings of Guy Gavriel Kay."--Booklist (starred review) "Utterly captivating." --Shannon Chakraborty, author of The City of Brass "This novel will catch hold of your dreams and keep you from sleeping." --Mary Robinette Kowal, author of The Calculating Stars "Wonderfully immersive--I was unable to put it down." --Andrea Stewart, author of The Bone Shard Daughter "Exactly the fantasy adventure novel you're craving." --Tasha Suri, author of The Jasmine Throne

"The Mask of Mirrors is exactly the fantasy adventure novel you're craving: an escape into a vast, enchanting world of danger, secret identities, and glittering prose."--Tasha Suri, author of Empire of Sand

"The Mask of Mirrors kept me up reading way past my bedtime. A web of intrigue, magic, and the art of the con this novel will catch hold of your dreams and keep you from sleeping."--Mary Robinette Kowal, author of The Calculating Stars

"The Mask of Mirrors ushers you into the fascinating city of Nadezra, replete with complex politics, intricate magic, and mysteries that readers will be racing to unravel. Wonderfully immersive--I was unable to put it down."--Andrea Stewart, author of The Bone Shard Daughter

"A tightly laced plot dripping with political intrigue. Carrick has built a strong foundation for things to come."--Publishers Weekly

"An intricate, compelling dream of a book that kept me turning pages, with a world and characters that felt deeply real and plenty of riveting twists and turns. I loved it!"--Melissa Caruso, author of The Obsidian Tower

"For those who like their revenge plots served with the intrigue of The Goblin Emperor, the colonial conflict of The City of Brass, the panache of Swordspoint, and the richly detailed settings of Guy Gavriel Kay."--Booklist (starred review)

"From the first page, I was utterly entranced by this glittering world filled with masked vigilantes, cunning conwomen, and dark magic. A sheer delight!"--Katy Rose Pool, author of There Will Come A Darkness

"The richly layered city of Nadezra, combined with the deeply intertwined politics and rivalries of its residents, creates a perfect backdrop for the enchantment of Carrick's plot and characters. A fantastically twisty read."--Fran Wilde, author of The Bone Universe trilogy

"Utterly captivating. Carrick spins an exciting web of mystery, magic, and political treachery in a richly drawn and innovative world."--S. A. Chakraborty, author of The City of Brass

M. A. Carrick is the joint pen name of Marie Brennan (author of the Memoirs of Lady Trent) and Alyc Helms (author of the Adventures of Mr. Mystic). The two met in 2000 on an archaeological dig in Wales and Ireland -- including a stint in the town of Carrickmacross -- and have built their friendship through two decades of anthropology, writing, and gaming. They live in the San Francisco Bay Area.
If the item details above aren’t accurate or complete, we want to know about it. Report incorrect product info.