The Near Witch - by V E Schwab 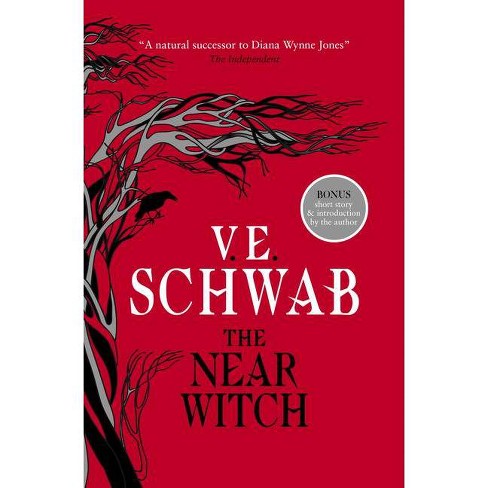 Bonus features include in-universe short story "The ash-born boy" and an introduction from V. E. Schwab.

ENTERTAINMENT WEEKLY'S BEST YA OF THE DECADE NEW YORK TIMES bestseller
Brand new edition of Victoria Schwab's long out-of-print, stunning debut. The Near Witch is only an old story told to frighten children. If the wind calls at night, you must not listen. The wind is lonely, and always looking for company. There are no strangers in the town of Near. These are the truths that Lexi has heard all her life. But when an actual stranger, a boy who seems to fade like smoke, appears outside her home on the moor at night, she knows that at least one of these sayings is no longer true. The next night, the children of Near start disappearing from their beds, and the mysterious boy falls under suspicion. As the hunt for the children intensifies, so does Lexi's need to know about the witch that just might be more than a bedtime story, about the wind that seems to speak through the walls at night, and about the history of this nameless boy. Part fairy tale, part love story, Victoria Schwab's debut novel is entirely original yet achingly familiar: a song you heard long ago, a whisper carried by the wind, and a dream you won't soon forget.

Best YA of the Decade List - Entertainment Weekly "gorgeous new release" - Entertainment Weekly "we're ready for it to come roaring back" - B&N SFF Blog "If you missed Schwab's debut novel when it first appeared, now's your chance to get on board." - Kirkus Reviews "we're ready for it to come roaring back" - Barnes & Noble Bookseller Picks for March "Situated in the sweet spot of the supernatural and the melancholy alongside works like The Ocean at the End of the Lane, [The Near Witch] boasts the dark and inviting sensibilities of fairy tales" - Barnes & Noble SFF Blog "a delicate, yet powerful novel that succeeds equally as either a journey back to the beginning or as a first tumble down the rabbit hole and into your next author obsession" - Barnes & Noble SFF Blog "an absolutely beautiful story...you can truly see her future works twinkling in the background" 4.5* - mall3tg1rl [has] that timeless allure, like a fairy tale or legend you can pick up five, ten, or twenty years from now and still have its setting and mood resonate with readers - The Bibliosanctum "an entirely unique and original story with an exquisitely painted world and for a debut novel, it's so well written and well done" - Travel the Shelves "The prose is beautifully written, and the characters will take residence in your heart" 5* - Her Campus "The prose is beautifully written, and the characters will take residence in your heart" 5* - Books in the Skye "the most gorgeous kind of fairytale, yet it feels like the kind of thing that's just odd enough to be real, and I mean it when I tell you that this was easily one of the best books I've read all year, and will undoubtedly go down as one of my favorite books, period" 5* - Howling Libraries "a modern classic that will undoubtedly be regarded as a masterpiece within its own genre by future generations" - Risingshadow "I loved getting to see themes in The Near Witch that I know become staples of her books...If you've read and loved other books by Schwab, I highly recommend sitting down with her debut." - Bookish Staff Picks "Schwab is truly a talented storyteller...Her characters are so well written that by the time you finish the story you feel as though you know them." 4* - Misadventures of a Reader A slow but intense gothic romance set in the atmospheric winds of the moors, where a witch's whisper can just barely be heard - Buzzfeed

V.E. Schwab is the No.1 New York Times bestselling author of ten books, including This Savage Song and the Darker Shade of Magic series, whose first book was described as a classic work of fantasy by Deborah Harkness. It was one of Waterstones' Best Fantasy Books of 2015, The Guardian's Best Science Fiction novels, and a Telegraph choice. The Independent has called her The natural successor to Diana Wynne Jones.
If the item details above aren’t accurate or complete, we want to know about it.

The Fenway Foul-Up - (Ballpark Mysteries) by David A Kelly (Paperback)

The Near Witch - by V E Schwab (Hardcover)

The Okay Witch, 1 - by Emma Steinkellner

Near - by Sally Lloyd-Jones (Board Book)