The Oh She Glows Cookbook: Over 100 Vegan Recipes to Glow from the Inside Out (Paperback) by Angela Liddon 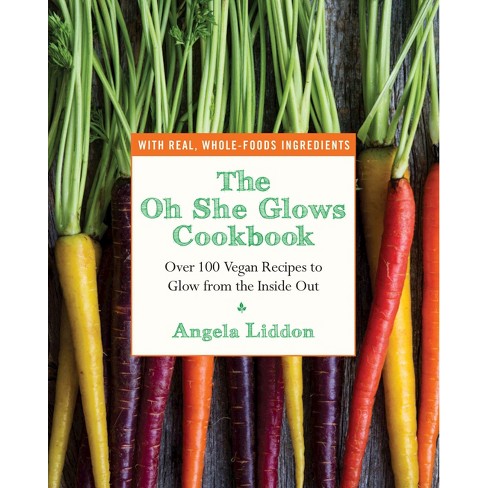 "The long-awaited debut cookbook from one of the most popular vegan food bloggers on the web After a decade of struggling with an eating disorder and subsisting on diet, low-calorie processed foods, Angela Liddon vowed to get healthy once and for all. Done with feeling sick and tired, she threw out her fat-free butter spray and low-calorie frozen dinners. Instead, Angela embraced whole foods that made her glow from the inside out. But first, she had to learn to cook-and eat-right. Five years ago, Angela started a blog, ohsheglows.com, to spread the word about her journey to health and the powerful transformation that food can make in our lives. Almost overnight, her energy and authenticity attracted readers eager to create their own positive life changes. Today, Oh She Glows attracts millions of visitors every month, making it one of the most popular vegan recipe blogs on the Internet. The Oh She Glows Cookbook is packed with more than 100 delicious recipes such as go-to breakfasts, protein-packed snacks, hearty entraees, and decadent desserts. From entre;es like the Crowd-Pleasing Tex Mex Casserole and Empowered Noodle Bowl to sweet treats like the Chilled Chocolate Espresso Torte with Hazelnut Crust and Angela's famous Glo Bakery Glo Bars, there is something for everyone. The Oh She Glows Cookbook is also allergy-friendly, with many gluten-free and soy-free options. Whether you are a vegan or you simply want to incorporate a few vegan meals into your week, Angela's recipes are a must-have for anyone who longs to eat well, feel great, and simply glow!"--

The New York Times bestseller from the founder of Oh She Glows Angela Liddon knows that great cooks depend on fresh ingredients. You'll crave every recipe in this awesome cookbook!
--Isa Chandra Moskowitz, author of Isa Does It So many things I want to make! This is a book you'll want on the shelf.
--Sara Forte, author of The Sprouted Kitchen A self-trained chef and food photographer, Angela Liddon has spent years perfecting the art of plant-based cooking, creating inventive and delicious recipes that have brought her devoted fans from all over the world. After struggling with an eating disorder for a decade, Angela vowed to change her diet -- and her life -- once and for all. She traded the low-calorie, processed food she'd been living on for whole, nutrient-packed vegetables, fruits, nuts, whole grains, and more. The result? Her energy soared, she healed her relationship with food, and she got her glow back, both inside and out. Eager to share her realization that the food we put into our bodies has a huge impact on how we look and feel each day, Angela started a blog, ohsheglows.com, which is now an Internet sensation and one of the most popular vegan recipe blogs on the web. This is Angela's long-awaited debut cookbook, with a trasure trove of more than 100 moutherwatering, wholesome recipes -- from revamped classics that even meat-eaters will love, to fresh and inventive dishes -- all packed with flavor. The Oh She Glows Cookbook also includes many allergy-friendly recipes -- with more than 90 gluten-free recipes -- and many recipes free of soy, nuts, sugar, and grains, too! Whether you are a vegan, vegan-curious, or you simply want to eat delicious food that just happens to be healthy, too, this cookbook is a must-have for anyone who longs to eat well, feel great, and simply glow!

"Angela Liddon knows that great cooks depend on fresh ingredients. You'll crave each and every recipe in this awesome cookbook!"
--Isa Chandra Moskowitz, author of Isa Does It "Angela has taken her vegan cookbook and shown us how truly delicious, colorful and versatile the recipes can be. So many things I want to make! This is a book you'll want on the shelf."
--Sara Forte, author of The Sprouted Kitchen "The Oh She Glows Cookbook proves that vegan is not a four-letter word! Angela's imaginative, mouth-watering, and totally approachable recipes will motivate everyone to cook healthy, vibrant foods for their whole family."
--Sarah Britton, creator of the blog My New Roots "If you can choose only one cookbook this year - Oh She Glows is it! Angela's approach to vegan recipes is fresh, vibrant, and simple... and her connection to her readers honest and real."
--Dreena Burton, author of Let Them Eat Vegan! "The Oh She Glows Cookbook is nothing short of a revelation. A brilliant collection of accessible and vibrant vegan recipes--it's hard to decide which recipe to cook first."
--Kathryne Taylor, creator of the blog Cookie + Kate "An amazing thing about Angela's recipes is that you completely forget that they are vegan. The Oh She Glows Cookbook is filled with indulgent nacho dips, doughnuts and veggie loaves - food we never imagined a healthy, vegan version of. It's an inspiring reminder that there are no limits to vegan cooking."
--David Frenkiel and Luise Vindahl, authors of Vegetarian Everyday: Healthy Recipes from Our Green Kitchen and creators of the blog Green Kitchen Stories
Oh She Glows is: "Best Vegan Blog"
--VegNews "Best Overall Blog" and "Best Veg Blog"
--Foodbuzz

Angela Liddon is the founder, recipe developer, and writer behind OhSheGlows.com - an award-winning destination for healthy plant-based recipes, with millions of visitors each month. Her work has been featured in local and international publications such as VegNews, O, The Oprah Magazine, Fitness, The Kitchn, Self, Shape, National Post, The Guardian, Glamour, and Best Health, among others. She has also won several awards, including VegNews Best Vegan Blog for three consecutive years, Chatelaine's Woman of the Year Hot 20 Under 30 award, and FoodBuzz's Best Veg Blog and Best Overall Blog. Her first cookbook, The Oh She Glows Cookbook, is an international bestseller. It was selected as Indigo's Book of the Year for 2014 and appeared on the New York Times bestseller list. Her eagerly-awaited follow-up cookbook, Oh She Glows Every Day, will be published in September 2016. Liddon and her husband, Eric, and daughter, Adriana, live in Oakville, Ontario, Canada, with their cat, Sketchie.
If the item details above aren’t accurate or complete, we want to know about it. Report incorrect product info.