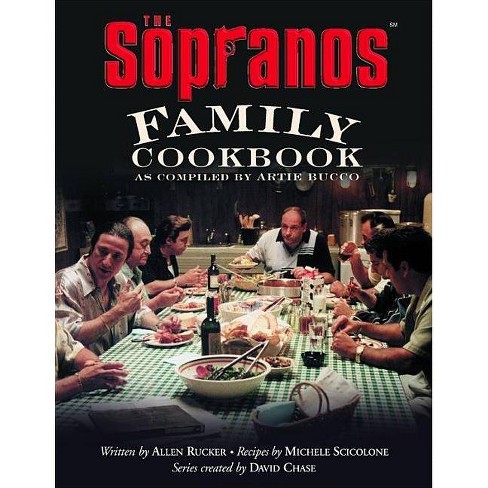 Featuring fabulous Southern Italian recipes, photos, and lore from HBO's hit show, this cookbook will have millions of fans eating like America's favorite mob family. The history of Neapolitan cuisine is included plus 100 recipes created with the characters in mind.

Nuovo Vesuvio. The family restaurant, redefined. Home to the finest in Napolitan' cuisine and Essex County's best kept secret. Now Artie Bucco, la cucina's master chef and your personal host, invites you to a special feast...with a little help from his friends. From arancini to zabaglione, from baccala to Quail Sinatra-style, Artie Bucco and his guests, the Sopranos and their associates, offer food lovers one hundred Avellinese-style recipes and valuable preparation tips. But that's not all! Artie also brings you a cornucopia of precious Sopranos artifacts that includes photos from the old country; the first Bucco's Vesuvio's menu from 1926; AJ's school essay on Why I Like Food; Bobby Bacala's style tips for big eaters, and much, much more. So share the big table with: Tony Soprano, waste management executive Most people soak a bagful of discount briquettes with lighter fluid and cook a pork chop until it's shoe leather and think they're Wolfgang Puck. Enjoy his tender Grilled Sausages sizzling with fennel or cheese. Warning: Piercing the skin is a fire hazard. Corrado Junior Soprano, Tony's uncle Mama always cooked. No one died of too much cholesterol or some such crap. Savor his Pasta Fazool, a toothsome marriage of cannellini beans and ditalini pasta, or Giambott', a grand-operatic vegetable medley. Carmela Soprano, Tony's wife If someone were sick, my inclination would be to send over a pastina and ricotta. It's healing food. Try her Baked Ziti, sinfully enriched with three cheeses, and her earthy 'Shcarole with Garlic. Peter Paul Paulie Walnuts Gualtieri, associate of Tony Soprano I have heard that Eskimos have fifty words for snow. We have five hundred words for food. Sink your teeth into his Eggs in Purgatory-eight eggs, bubbling tomato sauce, and an experience that's pure heaven. As Artie says, Enjoy, with a thousand meals and a thousand laughs. Buon' appetito!

ALLEN RUCKER was born in Wichita Falls, Texas, raised in Bartlesville, Oklahoma, and has an MA in Communication from Stanford University, an MA in American Culture from the University of Michigan and a BA in English from Washington University, St. Louis. He is the author of the New York Times bestseller, The Sopranos: A Family History, as well as two books with comedian Martin Mull, The History of White People In America and A Paler Shade of White. His next book, The Sopranos Family Cookbook, comes out in September, 2002. As a TV writer-producer, he co-founded the experimental video group, TVTV, and has written numerous network and cable specials and documentaries, including The History of White People In America, Christopher Reeve: A Celebration of Hope (Emmy nominee), CBS: The First Fifty Years, Penn & Teller's Sin City Spectacular, Big Guns Talk, a history of the Western, and TNT's Family Values: The Mob & The Movies. He is also the head writer of the official Sopranos website. Mr. Rucker is the recipient of the duPont-Columbia Journalism Award, the Writers Guild Annual Award, and two CableACE Awards, among others. The History of White People In America was honored by the Museum of Television & Radio at their 2001 Paley Television Festival in Los Angeles. Mr. Rucker also teaches in the USC School of Cinema-TV. He lives in LA and is married, with two children.
If the item details above aren’t accurate or complete, we want to know about it. Report incorrect product info.