The Testaments - by Margaret Atwood (Paperback) 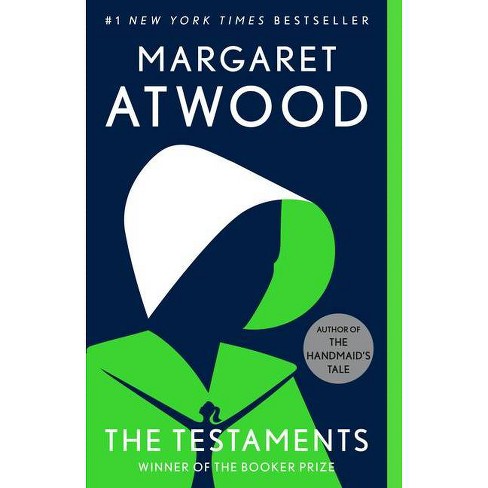 A New York Times bestselling modern masterpiece that reminds us of the power of truth in the face of evil" (People)--and can be read on its own or as a sequel to Margaret Atwood's classic, The Handmaid's Tale.

"Atwood's powers are on full display" (Los Angeles Times) in this deeply compelling Booker Prize-winning novel, now updated with additional content that explores the historical sources, ideas, and material that inspired Atwood. More than fifteen years after the events of The Handmaid's Tale, the theocratic regime of the Republic of Gilead maintains its grip on power, but there are signs it is beginning to rot from within. At this crucial moment, the lives of three radically different women converge, with potentially explosive results. Two have grown up as part of the first generation to come of age in the new order. The testimonies of these two young women are joined by a third: Aunt Lydia. Her complex past and uncertain future unfold in surprising and pivotal ways. With The Testaments, Margaret Atwood opens up the innermost workings of Gilead, as each woman is forced to come to terms with who she is, and how far she will go for what she believes.

"A chilling invitation no Atwood fan can resist . . . The Testaments reminds us of the power of truth in the face of evil."
--People

"Margaret Atwood's powers are on full display . . . Everyone should read The Testaments."
--Los Angeles Times

"A fast, immersive narrative that's as propulsive as it is melodramatic."
--Michiko Kakutani, The New York Times

"The Testaments is worthy of the literary classic it continues. That's thanks in part to Atwood's capacity to surprise, even writing in a universe we think we know so well."
--USA Today

"The women of Gilead are more fascinating than ever."
--NPR

"There may be no novelist better suited to tapping the current era's anxieties than Margaret Atwood."
--Entertainment Weekly

"A rare treat . . . a corker of a plot, culminating in a breathless flight to freedom."
--Laura Miller, Slate

Margaret Atwood, whose work has been published in more than forty-five countries, is the author of more than fifty books of fiction, poetry, critical essays, and graphic novels. In addition to The Handmaid's Tale, now an award-winning TV series, her novels include Cat's Eye, short-listed for the 1989 Booker Prize; Alias Grace, which won the Giller Prize in Canada and the Premio Mondello in Italy; The Blind Assassin, winner of the 2000 Booker Prize; Oryx and Crake, short-listed for the 2003 Man Booker Prize; The Year of the Flood, MaddAddam; and Hag-Seed. She is the recipient of numerous awards, including the Peace Prize of the German Book Trade, the Franz Kafka Prize, the PEN Center USA Lifetime Achievement Award, and the Los Angeles Times Innovator's Award. In 2019, she was made a member of the Order of the Companions of Honour for services to literature.
If the item details above aren’t accurate or complete, we want to know about it. Report incorrect product info.