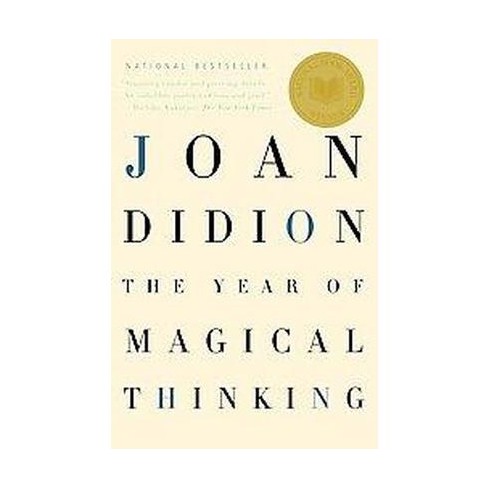 Didion chronicles the experience of losing her husband, the writer John Gregory Dunne, to a massive coronary, just weeks after the two of them watched as their only daughter was put into an induced coma to save her life. With honesty and passion, Didion explores this intensely personal yet universal experience.

From one of America's iconic writers, a stunning book of electric honesty and passion that explores an intensely personal yet universal experience: a portrait of a marriage--and a life, in good times and bad--that will speak to anyone who has ever loved a husband or wife or child. Several days before Christmas 2003, John Gregory Dunne and Joan Didion saw their only daughter, Quintana, fall ill with what seemed at first flu, then pneumonia, then complete septic shock. She was put into an induced coma and placed on life support. Days later--the night before New Year's Eve--the Dunnes were just sitting down to dinner after visiting the hospital when John Gregory Dunne suffered a massive and fatal coronary. In a second, this close, symbiotic partnership of forty years was over. Four weeks later, their daughter pulled through. Two months after that, arriving at LAX, she collapsed and underwent six hours of brain surgery at UCLA Medical Center to relieve a massive hematoma. This powerful book is Didion' s attempt to make sense of the "weeks and then months that cut loose any fixed idea I ever had about death, about illness . . . about marriage and children and memory . . . about the shallowness of sanity, about life itself."

"Thrilling . . . a living, sharp, and memorable book. . . . An exact, candid, and penetrating account of personal terror and bereavement . . . sometimes quite funny because it dares to tell the truth."
--Robert Pinsky, The New York Times Book Review "Stunning candor and piercing details. . . . An indelible portrait of loss and grief."
--Michiko Kakutani, The New York Times "I can't think of a book we need more than hers. . . . I can't imagine dying without this book."
--John Leonard, New York Review of Books "Achingly beautiful. . . . We have come to admire and love Didion for her preternatural poise, unrivaled eye for absurdity, and Orwellian distaste for cant. It is thus a difficult, moving, and extraordinarily poignant experience to watch her direct such scrutiny inward."
--Gideon Lewis-Kraus, Los Angeles Times "An act of consummate literary bravery, a writer known for her clarity allowing us to watch her mind as it becomes clouded with grief. . . . It also skips backward in time [to] call up a shimmering portrait of her unique marriage. . . . To make her grief real, Didion shows us what she has lost."
--Lev Grossman, Time

Joan Didion was born in California and lives in New York City. She is the author of five novels and seven previous books of nonfiction. Joan Didion's Where I Was From, Political Fictions, The Last Thing He Wanted, After Henry, Miami, Democracy, Salvador, A Book of Common Prayer, and Run River are available in Vintage paperback.
If the item details above aren’t accurate or complete, we want to know about it.

The Year of Magical Thinking - by Joan Didion (Hardcover)

De Dónde Soy / Where I Was from - by Joan Didion (Paperback)